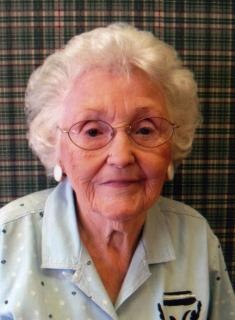 Funeral Mass: Friday, October 28, 2011, 10:30 a.m. at the St. John’s Catholic Church in Greenfield with burial in the Greenfield Cemetery.

Prayer Service: Thursday evening at 6:00 p.m. at the Steen Funeral Home in Greenfield.

Memorials: To the Eileen Reis memorial fund to be established by the family.

Eileen was raised in Orient and graduated from Orient High School. On January 18, 1932, she was united in marriage to Lawrence Reis in Orient, Iowa. To this union three children were born: Margaret, Fran and Larry. They farmed in Lee Township until 1969 when they moved to Greenfield. Her interests were: her family, sewing, gardening, traveling and painting. She was a member of the St. John's Catholic Church, St. John's Council of Catholic Women, Progress Club and Harmony Circle.

To order memorial trees or send flowers to the family in memory of Eileen Reis , please visit our flower store.
Send a Sympathy Card