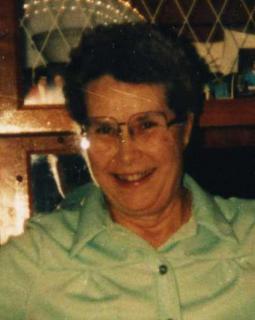 Funeral Services: Wednesday, October 27, 2010, at 11:00 a.m. at the Steen Funeral Home in Greenfield with burial in the Garner Cemetery in Bridgewater. A luncheon will follow the burial at the Avondale United Methodist Church.

Erma Eileen Woodside was born on February 18, 1920, in Adair County, Iowa, the daughter of Fred and Ida (Eshelman) Strong. She passed away on Saturday, October 23, 2010, at the Greenfield Manor at the age of 90.

Eileen was raised in Bridgewater. On December 26, 1937, she was united in marriage to Dwight Woodside. To this union one son, Merle was born. They spent most of their lived together living in Adams County. They spent several years wintering in Arizona, making numerous friends. After Dwight’s passing in 1981, she remained on the homestead until moving to Greenfield in 1998.

To order memorial trees or send flowers to the family in memory of Eileen Woodside , please visit our flower store.
Send a Sympathy Card