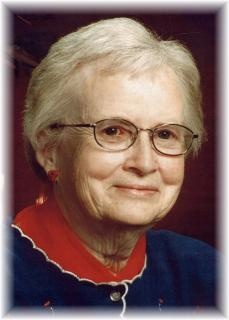 Funeral Services: Will be held on Monday, January 12, 2015, at 10:30 a.m. at the United Methodist Church in Greenfield with burial at the Greenfield Cemetery. A luncheon will be held at the church following the committal services at the cemetery.

Family Visitation: The family will greet friends on Sunday from 4:00 to 6:00 p.m. at the Steen Funeral Home in Greenfield.

Memorials: May be directed to the Elaine Daughenbaugh memorial fund to be established by the family at a later date.

Elaine lived her entire life in Adair County. She grew up in the house where she was born and attended Jackson Township Center School and Fontanelle High School graduating Salutatorian of her class of 1941. Elaine had her first communion in the Christian Church in Bridgewater, Iowa. After graduation she worked in the office at the Creamery in Greenfield. She was baptized as an adult at the Highland United Methodist Church, Fontanelle, Iowa.

Elaine was united in marriage to her best friend and lifelong partner, Samuel John Daughenbaugh after his return from the U.S. Navy in World War II. They were married on Thursday, November 29, 1945 in her parent’s home where she was born. Reverend A. J. Goodson performed the ceremony.

After marriage, Elaine spent the rest of her life working as a partner with Sam on the farm putting in crops and raising cattle and hogs. They rented farms in Jackson and Summerset Townships and Prussia Township until buying their 160 acre farm in Grove Township. She was also a homemaker and mother. She enjoyed babysitting her grandchildren. She loved to cook and had a large garden and many flowers. Some of her hobbies included sewing, hand embroidery, reading, and playing cards.

Sam and Elaine were blessed with three children; Judy Ann, Alan John, and Kathy Sue. She loved her family and enjoyed attending all of the many activities they were involved in. Elaine was a wonderful mother, grandmother, and great-grandmother, hard worker, and lived as a Christ-like example for all. She instilled discipline, respect for others, unselfishness, fairness, and unconditional love to all of her family.

Elaine was very active in her beloved Highland United Methodist Church until its closing in November of 2008. She then transferred her membership to the Greenfield United Methodist Church. Elaine served as a Sunday school and Vacation Bible School teacher. She was a member of the various women’s groups of the church through the years and served as an officer in many areas of the church and women’s organizations. She attended the Highland Bible study group for over 50 years. She was a member of the KYN Club for over 60 years. Elaine was also a member of the VFW ladies’ auxiliary group volunteering in many capacities. She was an auxiliary member for the Good Samaritan Center in Fontanelle and on the American Heart Association board and a volunteer. She was also a 4-H leader, Easter Seals volunteer, and SHARE volunteer.

To order memorial trees or send flowers to the family in memory of Elaine Daughenbaugh , please visit our flower store.