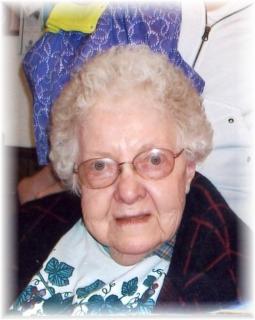 Funeral Services: Will be held on Saturday, February 16, 2013, at 10:30 a.m. at the Immanuel Lutheran Church in Greenfield with burial in the Greenfield Cemetery. A luncheon will be held at the church following services at the cemetery.

Visitation: Will be held on Friday, February 15th at the Steen Funeral Home in Greenfield from 2 to 8 p.m. with the family greeting friends from 6 to 8 p.m.

Memorials: To the Elaine Kintigh memorial fund to be established by the family at a later date.

Elaine L. Kintigh was born January 2, 1919, the daughter of George Christian and Laura Fredericka (Lehse) Winkelmann in Grant Township, Guthrie County, Iowa. She passed away on Tuesday, February 12, 2013, at the Good Samaritan Society in Fontanelle at the age of 94.

Elaine was raised and educated in Adair and Guthrie Counties. She was united in marriage to Willis Kintigh on March 20, 1945, in the Lutheran Parsonage in Greenfield, Iowa. They became parents of two children: Marcia and James. They farmed east of Greenfield and several years ago sold the farm to their son but remained living there. Elaine moved to the Maple Village in the fall of 2008. She worked as a housekeeper for Dr. Gantz and did painting and wallpapering with Elsie Onken and Lois Hoadley. She enjoyed braiding rugs, sewing, needlework and crossword puzzles.

Elaine was baptized and confirmed in the Lutheran faith on April 9, 1933, and remained a faithful member to her Lord and Savior. She was a member of the Lutheran Women Missionary League, Altar Guild, Tuesday afternoon sewing group, and various neighborhood clubs.

She was preceded in death by her parents; husband, Willis Kintigh in 1994; two infant siblings and sister, Mildred Powell.

To order memorial trees or send flowers to the family in memory of Elaine Kintigh , please visit our flower store.
Send a Sympathy Card