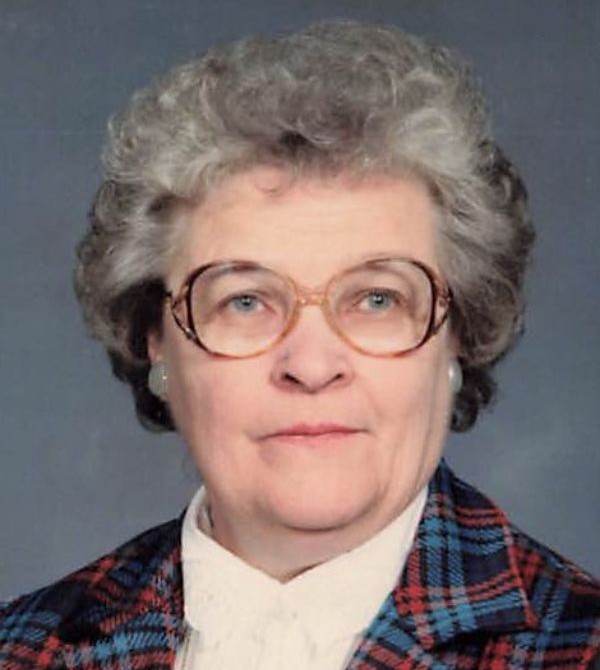 Celebration of Life Services: Will be held on Friday, March 25, 2022, at 10:30 a.m. at the Immanuel Lutheran Church in Greenfield with burial in the Greenfield Cemetery.  The Rev. Dr. Keith Schweitzer will officiate the service.  The Lamb Funeral Home in Greenfield is in charge of the professional arrangements.

Luncheon:  Will be held at the church following the burial.

Memorials:  To the Eldeen Stewart Memorial Fund to be established by the family at a later date.

Eldeen Ruth (Mangels) Stewart was born December 16, 1925, the daughter of Edward Wilke and Marie Carolina Wilhemia (Hauptmeier) Duitsman in Pickrell, Nebraska.  She passed away on Saturday, February 19, 2022, at her son’s home in Perry, Iowa, at the age of 96.
Eldeen was raised in Johnson County, Nebraska and graduated from Sterling High School in Nebraska.  After high school her family moved to Greenfield.  On November 2, 1946, she was united in marriage to Francis Mangels in Greenfield, Iowa.  To this union three children were born: Russell, Ronald and Arlyce.  Eldeen worked at Midway Cafe in Massena, Jacks Hardware, Doris’s Grocery Store in Bridgewater and later helped in the Nodaway Valley School in the lunch room when needed.  On December 30, 1973, she was united in marriage to Donald Eugene Stewart in Greenfield, Iowa.
Eldeen loved going to church to tie quilts for World Relief, going to card clubs and loved playing pitch and 500 and loved animals.  She attended many of grandkids activities and school events with Gene.  Eldeen was a very optimistic, loving and caring person.  She was always helping others especially her kids.
She was a member of the Immanuel Lutheran Church in Greenfield, LWML circle at the church, the American Legion Auxiliary and she always remembered everyone’s birthday.  Eldeen once told someone, “my name is Eldeen, needle spelled backwards and I love to sew.”
She was preceded in death by her parents; husband, Francis in 1972; husband, Gene in 2013; brother, Henry Duitsman; sons-in-law, Steven Messer and Dick Cooper; step grandchild; brother-in-law, Jerry Bower; brothers and sisters-in-law, Harold and Mary Wallace, Dale and Twyla Sturdy, Clark Roberts, Gene Mangels and Faye Mangels.
She is survived by her two sons, Russell Mangels (Deb) of Perry, Iowa and Ron Mangels (Suzanne) of Rosharon, Texas; daughter, Arlyce Messer of Greenfield; step children, Vicki Lensch (Skip) of Redwing, Minnesota, Peg Cooper of Greenfield, Donnie Stewart (Suzette) of Appleton, Wisconsin, twins - Tom Stewart (Kim) of Alburnette, Iowa and Tim Stewart (Michele) of Abbotsford, Wisconsin; 4 grandchildren; 5 great grandchildren; 18 step grandchildren; 11 step great grandchildren; two sisters, Joan Bower of League City, Texas and Irene Roberts of Urbandale, Iowa; sister-in-law, Roberta Leder of Bettendorf, Iowa; brother-in-law, Robert Mangels of Marshalltown, Iowa; other relatives and friends.

To order memorial trees or send flowers to the family in memory of Eldeen (Mangels) Stewart, 96, of Greenfield, please visit our flower store.
Send a Sympathy Card

There will be no visitation. A luncheon will be held at the church following the burial.