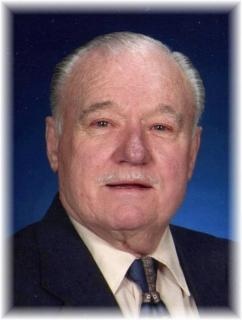 Graveside Services: Will be held on Saturday, January 19, 2013, at 11:00 a.m. at the Greenfield Cemetery. Full military graveside rites will be conducted by the Greenfield American Legion Head-Endres Post No. 265 and VFW Post No. 5357. Pastor Jeffrey Keuning will officiate the service.

Memorials: To the Eldon Weber memorial fund to be established by the family at a later date.

Eldon was baptized and later confirmed at the Immanuel Lutheran Church in Greenfield. He graduated with the class of 1953 from Greenfield High School. In his junior year of high school he began employment at Fontanelle Implement. Upon graduation he was a mechanic in the United States Army stationed in Anchorage, Alaska. After his discharge he returned to Fontanelle Implement, later going into business on his own, which he was operating until his death.

Eldon married Norma Lee Rice on January 14, 1961, in Greenfield, Iowa. To this union one daughter, Sharon Kay was born. Eldon's’ hobbies were working on old tractors, going to auctions and garage sales.

He is survived by his wife of 52 years, Norma Weber of Greenfield; daughter, Sharon Wagner and her children Derek and Veronica Elwood of Greenfield; sister-in-law, Shirley Rice of Murray, Iowa; his special four legged friends, Toby, Bitty and Whiskerchoo; other relatives and friends.

He was preceded in death by his parents; father and mother-in-law, Oscar and Margaret Rice; and brother-in-law, Larry Rice.

To order memorial trees or send flowers to the family in memory of Eldon Weber , please visit our flower store.