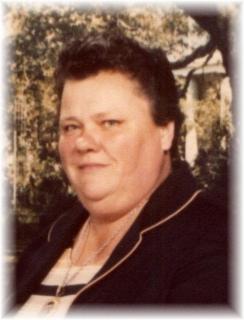 Vivian Eleanor Reichardt Haley passed away on April 12, 2012, at the Atlantic Hospice Center in Atlantic.

Graveside Services: Will be held on Friday, May 25, 2012, at 2:30 p.m. at the Victoria Township Cemetery, south of Massena. Father Lazarus Kirigia will officiate the service. A Luncheon will follow the graveside service at the Massena American Legion/Lions Hall.

Memorials: Memorials may be made directed to the family.

Eleanor attended country school at Victoria Township #7 and high school in Massena, IA. She continued to live and work on the family farm with her mother and brother until her marriage to Raymond Rechtenbach. Eleanor was employed by the Lazy Ike Company in Corning, Iowa, retiring in 1995. On August 30, 1980 Eleanor married Lloyd Haley. They made their home in Corning, IA. Lloyd and Eleanor enjoyed hunting, fishing and camping throughout their marriage. They included brother, Sonny, on many occasions. One of Eleanor’s favorite memories was entertaining her nephews, Paul, John and Troy.

Eleanor was raised in the Catholic Church. She, also, was a member of the American Legion Auxiliary of Corning.

Preceding her in death were her parents, Bruno and Ethel; nephew, Paul Hepler; grandparents, uncles, aunts, and cousins. Eleanor was, also, preceded in death by many pets in her lifetime, however, the most precious was her little dog, Sissy.

The family of Eleanor Haley wishes to express their gratitude for all acts of kindness shown to them in their time of sorrow and invites you to share in a luncheon at the Massena Lions-Legion Hall following services at the cemetery.

To order memorial trees or send flowers to the family in memory of Eleanor Haley , please visit our flower store.
Send a Sympathy Card