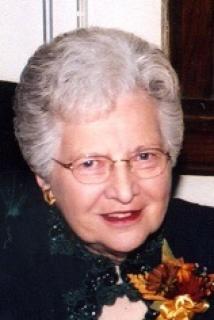 Funeral Service: Will be held on Wednesday, February 8, 2017, at 10:30 a.m. United Methodist Church in Cumberland with burial in the Greenwood Cemetery, Cumberland, Iowa. Pastor Casey Pelzer will officiate the service. A luncheon will follow the burial at the Cumberland Community Building.

Open Visitation: Friends may call at the Cumberland United Methodist Church on Tuesday from 4:00 p.m. to 8:00 p.m.

Family Visitation: The family will greet friends at the Cumberland United Methodist Church on Tuesday evening from 6:00 p.m. to 8:00p.m.

Memorials: To the Elgene Sander memorial fund to be established by the family at a later date.

Elgene Bess Nolte was born to Ethel (Hembd) Nolte and Will G. Nolte on November 6, 1929, at the family farm near Ackley, Iowa, in Hardin County. She passed away on Saturday, February 4, 2017, at Atlantic Specialty Care in Atlantic, Iowa, at the age of 87.

She received her high school diploma from the Ackley Public School in 1947. She then attended the University of Dubuque her freshman year of college and transferred to Drake University, where she graduated with a Bachelor of Music Education Degree in 1951.

Elgene began teaching vocal music at Lohrville, Iowa, where she met Max E. Sander, who was also on the teaching staff. They married and moved to Earlham and in 1952, their first child, Rebecca Ruth Sander was born. They later moved to Dows and in 1956, Blake Gene Sander was born. After several years teaching in Van Meter, the family moved to Cumberland in 1963, where Max served as school superintendent until his retirement in 1987. Elgene taught elementary music at C & M and then later became the K-12 vocal music teacher. She then taught elementary vocal music part-time until her retirement in 1996.

Through the years, Elgene gave countless piano lessons, played the piano for many area funerals and weddings, and enjoyed directing area choirs such as the “Small is Beautiful Choir”. Elgene belonged to the American Legion Auxiliary and enjoyed traveling with fellow members from Cumberland and Massena to play the piano for meetings. She was an active member of the Cumberland United Methodist Church. She taught Sunday school when her children were young, was active in the United Methodist Women’s group, and was a church pianist for over forty years. Elgene was also a long time member of the Eastern Star, first in Massena and most recently in Greenfield.

Elgene was an avid reader and enjoyed crossword puzzles, but her favorite past time was attending sports, music and dance activities of her five grandchildren.

Elgene is survived by her children, Becky (Steve) Pelzer of Cumberland and Blake Sander of Anita and her sister, Elva Candor, of West Des Moines. Also surviving are her grandchildren, Aaron (Amanda) Pelzer of Norwalk; Casey (Haley) Pelzer of Atlantic; Molly (Heath) Haner of Council Bluffs; Lindsay (Wade) Wagner of Greenfield; Elizabeth Sander of Mesa, AZ; great-grandchildren Gracey and Nelley Pelzer of Atlantic and Audric, Aidrey and Adicus Pelzer of Norwalk; nephew Todd (Lyn) Candor and sons Tyler, Keaton and Kendall of Merrill and niece Lynn (Bob) Neswold and daughter Peyton of Des Moines; and many former colleagues and friends.

Elgene was preceded in death by her parents and her husband Max in 1997.

To order memorial trees or send flowers to the family in memory of Elgene Sander , please visit our flower store.
Send a Sympathy Card