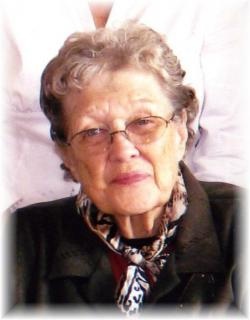 Elizabeth McLaren passed away on Tuesday, June 12, 2012, at the Heritage House in Atlantic.

Funeral Services: Will be held on Saturday, June 16, 2012, at 10:30 a.m. at the Massena Baptist Church in Massena with burial in the Massena Center Cemetery, north of Massena.

Visitation: Will be held on Friday, June 15th from 4 to 8 p.m. at the Massena Baptist Church with the family greeting friends from 6 to 8 p.m.

Memorials: Memorials may be made to the Elizabeth McLaren memorial fund to be established by the family.

Elizabeth Charleen Martens McLaren was born April 6, 1925, in Cass County, Iowa, the daughter of Charles and Lela Jones Martens. She went home to Heaven on June 12, 2012 at the age of 87 years. Elizabeth grew up during the Depression, and graduated from Cumberland High School. She taught country school for a year, and then married Robert McLaren on February 4, 1945. They had 4 children: Jacqueline DeGroff of Topeka, KS; Rob McLaren and his wife, Tina, of N. Richland Hills, TX; Patti Hensley and her husband, Kerry, of Massena, IA; and Barb Erickson and her husband, Steve, of Massena, IA. Elizabeth had 10 grandchildren and 15 great-grandchildren.

Robert and Elizabeth lived at the McLaren home place southwest of Massena. Robert milked cows and farmed; Elizabeth was kept busy raising the 4 children. She enjoyed attending the Iris Garden Club meetings with Grandma and Donna; she also helped with a neighborhood Bible Study and other church activities. Elizabeth was an avid reader and always was in the middle of a good book. She enjoyed playing the piano and made many beautiful quilts for her kids and grandkids. Robert and Elizabeth loved to travel; after Robert’s death, Liz continued taking trips with family and friends. She also took up square dancing; helped at Awanas, and even participated in the State Fair Spelling Bee! In her later years, Mom always enjoyed a good Matlock or Murder She Wrote DVD.

It’s hard to think of our parents except as together – and now they are together for always in Glory. Robert once said his greatest concern was that his grandchildren and great-grandchildren come to know the Lord Jesus as Saviour. “For what shall it profit a man to gain the whole world but lose his own soul.” Matthew 16:26 In the last years of her life, Mom would forget and tended to repeat things when visiting with someone. One of her grandsons visited her, and she asked him a number of times, “Are you saved?” “Are you saved?” We are very thankful for the words of Scripture, “Believe on the Lord Jesus Christ, and you shall be saved.” Acts 16:31

To order memorial trees or send flowers to the family in memory of Elizabeth McLaren , please visit our flower store.
Send a Sympathy Card