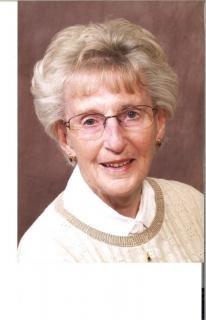 Graveside Services: Will be held on Saturday, September 24, 2016, at 10:00 a.m. at the Greenfield Cemetery, Greenfield, Iowa. Pastor David Kincaide will officiate the service.

Ellen Camp was born on January 27, 1922, in Grand River Township, Adair County, Iowa, the daughter of Carl and Alma R. Childs. She attended a rural school and graduated from Greenfield High School in 1939.

She moved to San Diego, California in 1940. Her work experience included jobs with Standard Parachute Factory, Consolidated Vultee Aircraft Company and the San Diego Baseball Club. In 1958, she joined the staff of the San Diego Unified School District where she held the positions as a Junior College Bookstore Manager and later a high school Financial Secretary. She retired in 1978 with 20 years of service. During these years she attended Grossmont Junior College in El Cajon, California and graduated with an AA degree in 1976.

She was united in marriage with Raymond Camp in 1942 in La Jolls, California and they became the parents of two children, Lawrence and Linda. They lived in Lakeside, California for many years before moving to Naples, Idaho in 1977 and later to Coeur d’Alene, Idaho in 1988. She moved to Colorado, California and Texas before returning to North Idaho in 2014. Since then she lived in Post Falls, Idaho.

She was preceded in death by her parents; two brothers, Harold and Dean; two sisters, Reva and Belva; and her husband, Raymond in 2007.

To order memorial trees or send flowers to the family in memory of Ellen Camp , please visit our flower store.
Send a Sympathy Card