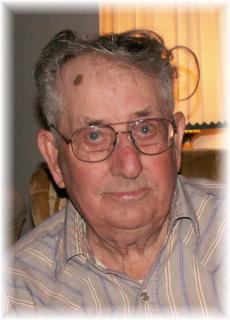 Funeral Services: Will be held on Wednesday, April 22, 2015, at 10:30 a.m. at the Steen Funeral Home in Fontanelle with burial in the Fontanelle Cemetery. Full military graveside rites will be conducted by the Fontanelle American Legion Carlson Post No. 247. A luncheon will be held at the Emmanuel Lutheran Church following the burial. Pastor Steven Broers will officiate the service.

Open Visitation: Will be held on Tuesday at the Steen Funeral Home in Fontanelle from 4:00 p.m. to 8:00 p.m.

Memorials: May be directed to the Ellwood Bond memorial fund to be established by the family.

Ellwood was raised in Adair County, Iowa. He served his country in the United States Army during WW II. On September 11, 1944, he was united in marriage to Shirley Purdy in Greenfield, Iowa. They had one son, Tim. Ellwood farmed his entire life. Ellwood enjoyed many things in life aside from farming. He had quite a long history of draft horse showing and driving. He really enjoyed his draft horses and wagons, tractor collection and restoration, and antique collecting.

He is survived by his sister-in-law, Helen Sopocko of Diamond Bar, California; claimed grandchildren, Mark Sorensen of Bridgewater and Shannon Fecher and husband Matt of Jefferson, Iowa; great grandchildren; numerous nieces, nephews, other relatives and friends.

To order memorial trees or send flowers to the family in memory of Ellwood Bond , please visit our flower store.
Send a Sympathy Card