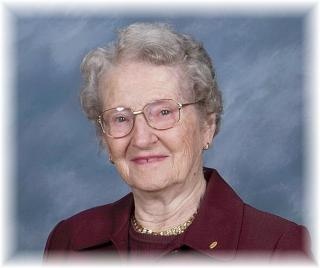 Elsie Onken passed away on Tuesday, June 26, 2012, at the Greenfield Manor.

Memorials: To the Elsie Onken memorial fund to be established by the family.

Elsie Darlene Onken was born March 23, 1916, in Grand River Township, Adair County, Iowa, to Ray C. and Gladys B. (Busch) Augustine. She passed away peacefully on Tuesday, June 26, 2012, at the Greenfield Manor in Greenfield, Iowa, at the age of 96.

Elsie grew up and was raised in Adair County. On July 19, 1933, she was united in marriage to Arnold Onken in Shenandoah, Iowa. To this union two children were born: LeRoy and Marilyn. Arnold and Elsie farmed in Adair County most of their lives and retired and moved into Greenfield in 1976. Arnold passed away in 1996.

She was preceded in death by her parents; husband, Arnold Onken; three brothers, Verlyn Augustine, Roscoe Augustine and Wyman Augustine; and one sister, Velma Combs.

To order memorial trees or send flowers to the family in memory of Elsie Onken , please visit our flower store.