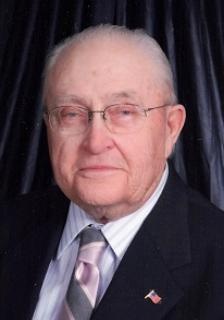 Funeral Services: Will be held on Saturday, March 6 2021, at 11:00 a.m. at the United Methodist Church in Fontanelle with burial in the Fontanelle Cemetery with full military honors by the Fontanelle American Legion Carlson Post No. 247. Pastor Cathy Nutting will officiate the service. The Steen Funeral Home in Fontanelle is in charge of the professional arrangements.

Memorials: Memorials may be directed to the Elvin Tannatt memorial fund to be established by the family at a later date.

Raymond Elvin Tannatt was born September 28, 1925, on the family farm in Prussia Township, Adair County, Iowa. He was the son of Raymond R. and Carrie (Woodruff) Tannatt. He passed away on February 27, 2021, at the Good Samaritan Society in Fontanelle, Iowa, at the age of 95.

Elvin attended country school at Prussia Township #3 and graduated from Fontanelle High School in 1944. He enjoyed playing sports during his high school years.

On August 10, 1944, he was united in marriage to his high school sweetheart, Shirley Tiedeman at the Congregational Church parsonage. They enjoyed 76 years together.

He was baptized in the Congregational Church in Fontanelle.

Elvin left to serve his country in the Army during WW II in November of 1944. He received his basic training at Camp Roberts in California. On April 13, 1945, he left by transport ship for the Philippines in the Pacific Theater. On August 9th, 1945, he landed in Japan. Elvin spent one year in Tokyo as an Army Staff Sergeant within the Criminal Investigation Department. The song “Sentimental Journey” was very special to him, as it was played aboard the ship bringing him back home. Elvin was fortunate to participate in the Iowa Honor Flight program in 2009.

Upon arriving home after the war, Elvin and Shirley made their home on the original Tannatt farmstead. They started farming with a team of horses and an Oliver 60 tractor. Elvin attended the GI Farm School in 1947-1948 at Orient. The homestead farm was honored as a Century Farm in 1986.

Elvin and Shirley, through hard work and perseverance, expanded the farm. Conservation of the land was a priority. He believed that you should leave the land better than you found it. He was awarded the Southwest Iowa Conservation Soil award. In 1976, he was honored as a Master Pork Producer. The farm was Elvin’s pride and joy. Farming was his passion.

In his lifetime he enjoyed playing cards and dancing. He was proud of becoming a pilot and owning his own plane. Elvin was very active in the American Legion and Drill Team. He enjoyed representing the American Legion Carlson Post No. 247 in local parades with his convertible car. Elvin and Shirley toured the state of Iowa with the Iowa Motorway club for many years.

He was preceded in death by his parents; brother, Ellis; brother-in-law, Donald Tiedeman; and sister-in-law, Velma Tiedeman.

To order memorial trees or send flowers to the family in memory of Elvin Tannatt , please visit our flower store.
Send a Sympathy Card