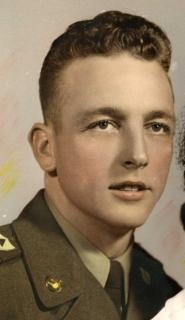 Funeral Services: Monday, March 7, 2011, at 10:30 a.m. at the First Presbyterian Church in Dexter with burial in the Dexter Cemetery with full military graveside rites by the Iowa National Guard Military Funeral Honors.

Open Visitation: At the church on Monday one hour prior to services.

On March 23rd, 1952, Al was united in marriage to Juanita Jean Alden at the First Presbyterian Church in Dexter, Iowa. To this union four children were born: a Baby Girl, Ronald, and twins Sheralyn and Karen.

Al served his country for over 20 years in the United States Army. During that time he served two tours of duty in Korea and Germany, one tour in Japan, and was stationed stateside in Texas, Louisana, Minnesota, Wisconsin, Oklahoma, Washington, California, Colorado, Virginia, and New Jersey. He was awarded the Bronze Star in 1953 for meritorious service. He retired in 1966 with the rank of Master Sergeant E8.

Al did farm work before entering the Army. Upon retirement from the Army, Al and family made their home in Dexter, Iowa. Over the next 22 years he worked in the parts department for Hunter Motors in Earlham, Iowa and for Mid-States Ford Motor Company in Des Moines, Iowa. He did maintenance work for the City of Dexter, and worked in circulation for the Dallas County News and retired in 1988.

Al was a longtime member of the First Presbyterian Church and the Masonic Lodge in Dexter. He enjoyed gardening, hunting, and fishing. In his later years he also enjoyed spending time with his step-granddaughter Dana Gallagher, woodworking and The Casey Card Club.

Al married Maryetta (Bond) Twombly on April 7th, 1990, at the Little Brown Church in Nashua, Iowa. They made their home together, first in Dexter, then in Greenfield.

Al moved to Minnesota in 2009, moving closer to his daughter Sheralyn Bennett and husband Derrick and grandchildren Aaron, Ryan and Paige.

He was preceded in death by his parents, his infant daughter, his first wife Juanita, six sisters, one brother, one nephew, his second wife Maryetta, one step-son, and four step-grandchildren.

To order memorial trees or send flowers to the family in memory of Elvis Meddock, Jr. , please visit our flower store.
Send a Sympathy Card