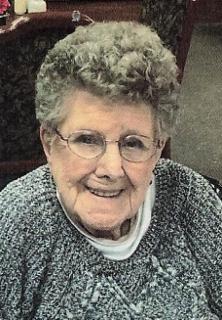 Graveside Services: Will be held on Friday, October 23, 2020, at 11:30 a.m. at the Orient Cemetery in Orient, Iowa. Father Clement Owusu will officiate the service. The Steen Funeral Home in Greenfield is in charge of the professional arrangements.

Family Visitation: The family will greet friends on Friday morning from 10:00 a.m. until 11:00 a.m. at the Steen Funeral Home in Greenfield.

Due to state and federal guidance on gatherings due to the COVID-19 pandemic, the family and funeral home requests masks must be worn and social distancing to be practiced.

Memorials: May be directed to the Community Care Center in Stuart, Iowa.

Emily Louise Wagner was born November 29, 1920, the daughter of Francis (Frank) Thurston and Gertrude Evangeline (Goosney) Whalen in Massachusetts. She passed away on Tuesday, October 20, 2020, at the Community Care Center in Stuart, Iowa, at the age of 99.

Emily's mother passed away when she was four years old and she was then raised by her maternal and paternal grandparents in Gloucester and Fall River, Massachusetts. On July 28, 1945, she was united in marriage to Charles Martin Wagner in the St. Joseph Catholic Church in Fall River, Massachusetts. They left to move to Martin’s home state of Iowa. During their marriage, she worked at Donna’s Café and Martin worked for the city of Orient.

To order memorial trees or send flowers to the family in memory of Emily Wagner , please visit our flower store.
Send a Sympathy Card