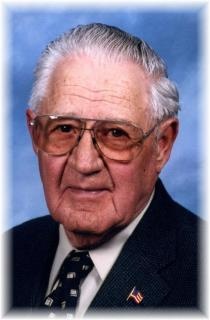 Memorials: To the Bud Schultz Memorial Fund to be established by the family.

Bud grew up around Wiota and Menlo, Iowa, graduating from Menlo High School in 1941. He served his country in the United States Army from 1943 to 1945, where he was a prisoner of war in Germany for 95 days. On February 12, 1946, he was united in marriage to Beulah Mae Paullin in Atlantic, Iowa. They lived in Greenfield for their entire married life where they raised their two daughters, Carol and Sally.

Bud owned and operated Schultz Plumbing and Heating in Greenfield for many years retiring in 2003 at the age of 80. He enjoyed spending time with his family, watching sports, the Iowa Hawkeyes, fishing, and camping. He especially loved the outdoors, walking two miles almost every day. He was a member of the United Methodist Church, the American Legion, and the Veterans of Foreign Wars.

He was preceded in death by his parents; wife, Beulah one month ago; daughter, Carol Ashmore; and two brothers, Robert "Russ" Schultz and Francis Schultz.

To order memorial trees or send flowers to the family in memory of Bud Schultz , please visit our flower store.