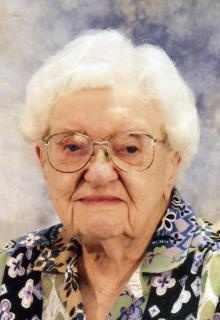 Funeral Services: Monday, May 7, 2012, at 2:00 p.m. at the Emmanuel Lutheran Church in Fontanelle with burial in the Fontanelle Cemetery.

Open Viewing: Sunday, May 6th from 4 to 6 p.m. at the Steen Funeral Home in Fontanelle.

Family Visitation: Sunday evening from 6 to 8 p.m. at the Steen Funeral Home in Fontanelle.

Memorials: To the Emmanuel Lutheran Church.

Esther Elizabeth Gosnell was born September 26, 1911, in Adair County, Iowa, the daughter of Edward and Emma (Queck) Freeman. She passed away on Thursday, May 3, 2012, at the Good Samaritan Society in Fontanelle at the age of 100.

Esther enjoyed camping with her nieces and nephews, gardening, flowers, knitting, crocheting, crocheting covered hangers for family and friends and quilting with the women of the church. She especially enjoyed her grandchildren and great grandchildren. She also had a love for chocolate. She was a lifelong member of the Emmanuel Lutheran Church and an honorary member of the women's circle.

She was preceded in death by her parents; both husbands; and brother, Elton Freeman.

To order memorial trees or send flowers to the family in memory of Esther Gosnell , please visit our flower store.
Send a Sympathy Card