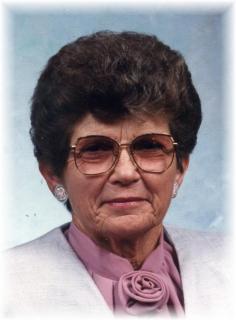 Funeral Service: Will be held on Thursday, November 13,, 2014, at 11:00 a.m. at the St. John’s Lutheran Church in Casey with burial following in the Oakwood Cemetery, Casey, Iowa. Pastor Jeffrey Keuning will officiate the service.

Family Visitation: The family will greet friends at the church one hour prior to services on Thursday, November 13th.

Memorials: To the St. John's Lutheran Church in Casey.

Esther grew up in the Greenfield area attending Greenfield Elementary and High School graduating in 1940. She graduated from Drake University in 1964. During her teaching career, she taught in various rural schools followed by twenty one years as a fifth grade teacher at Clegg Park School in the West Des Moines School System.

She was married to Louis E Lemke on December 6, 1942 in Ocean Beach, California shortly before Louis’ entry into the US Navy during WWII. During their married life they lived in several Iowa locations before returning to Adair County in 1968 where they resided on their farm until 1993. Since their retirement in 1982, Louis and Esther enjoyed traveling to Branson, Missouri and spending winter months in Arizona. They recently lived at Wesley Acres in Des Moines until Louis’ death in 2010. Since that time, Esther has lived at Trinity Center at Luther Park in Des Moines. Esther was a member of St. John’s Lutheran Church in Casey, Iowa for many years.

Esther is survived by her son, Lou Lemke of Adel, Iowa and her son-in-law, Paul Johnson of Des Moines, Iowa, and four grandchildren and a great grandchild.

She was preceded in death by her husband, Louis, her parents; her daughter Joyce (Lemke) Johnson, her son Randall; two sisters and a brother.

To order memorial trees or send flowers to the family in memory of Esther Lemke , please visit our flower store.
Send a Sympathy Card