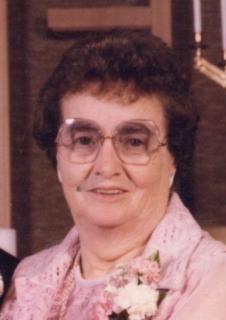 Funeral Services: Will be held on Saturday, March 2, 2019, at 2:00 p.m. at the Fontanelle United Methodist Church with burial in the Fontanelle Cemetery. Pastor Cathy Nutting will officiate the service. A luncheon will be held at the church following the services at the cemetery.

Visitation: Will be held at the church on Saturday one hour prior to services.

Memorials: Memorials may be directed to the Ethel Armstrong memorial fund to be established by the family at a later date.

Ethel Irene Armstrong was born June 1, 1921, the daughter of James and Edith (Garst) Vanderpool in Greenfield, Iowa. She passed away on Monday, February 25, 2019, at the Greenfield Rehabilitation and Health Care Center at the age of 97.

Ethel graduated from Greenfield High School in 1939. On December 30, 1939, she was united in marriage to Kenneth Armstrong in Maryville, Missouri. To this union two children were born: Carol and Duane. They were able to celebrate their 64th wedding anniversary together. For most of their marriage they lived on a farm north of Fontanelle, moving into town in 1974.

Ethel was an avid reader. She enjoyed writing letters, politics and baking, especially pies. She was very involved in the family history for the Armstrong and Vanderpool families. For several years she worked at Strom’s Grocery in Fontanelle.

She was preceded in death by her parents; husband, Kenneth in 2004; four sisters, Nora Morrison, Ruth Richards, Julia Albro and Eleanor Hofmann; one brother, Merle Vanderpool; and son-in-law, Richard Mattox.

She is survived by her daughter, Carol Mattox of Shelby, Iowa; son, Duane Armstrong and wife Lois of Greenfield; seven grandchildren; fourteen great grandchildren; other relatives and friends.

To order memorial trees or send flowers to the family in memory of Ethel Armstrong , please visit our flower store.
Send a Sympathy Card