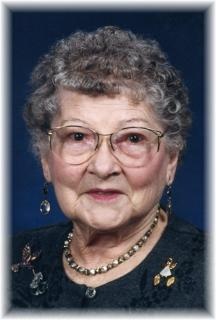 Funeral Services: Will be held on Monday, January 14, 2013, at 11:00 a.m. at the United Methodist Church in Greenfield with burial in the Greenfield Cemetery.

Visitation: Will be held on Sunday at the Steen Funeral Home in Greenfield from 1 to 4 p.m. and the family will greet friends on Monday one hour prior to services at the church.

Memorials: To the Ethel Heuckendorf memorial fund to be established by the family.

Ethel June Heuckendorf was born June 3, 1916 to John Henry and Bessie Etta (Bayman) Vorrath in Washington Township, Adair County, Iowa. She passed away January 9, 2013 at Northcrest Living Center in Council Bluffs, Iowa at the age of 96.

On January 26, 1936 she was united in marriage at the Methodist Parsonage in Greenfield, Iowa to Herbert “Hub” Heuckendorf of near Fisk. Three children were born to this union: Richard, Vivienne, and Lois. Ethel and Herbert farmed 1 mile east of Richland for eleven years until 1947 when they purchased a farm one mile south of Richland. They farmed until 1974 when they retired and moved to Greenfield.

Ethel worked at the Richland Consolidated School as a cook for a few years, and also sold Avon products in that neighborhood. She raised and dressed chickens, which she sold in the Greenfield and Creston areas.

Ethel was very faithful to her church. She was baptized in the Penn Avenue Methodist Church. Upon moving to Greenfield, she became a member of the Greenfield Methodist Church, and was always active in a church fellowship group. She helped often in the church kitchen for weddings, funerals, and dinners, and also provided cakes and salads. Ethel loved gardening. She always planted a very large vegetable garden and canned the produce. Flower gardens provided her with many hours of enjoyment. Ethel had a variety of fruit trees on their farm, and years later at the Greenfield Apartments, she planted peach seeds and loved sharing that produce with her neighbors and friends. Friends were very important to Ethel, and she belonged to the Richland Sunshine Club and the Old Friends Club in Greenfield. Family was extremely special to Ethel. To keep in touch with immediate and extended family members she wrote letters, made phone calls, and hosted family dinners.

To order memorial trees or send flowers to the family in memory of Ethel Heuckendorf , please visit our flower store.