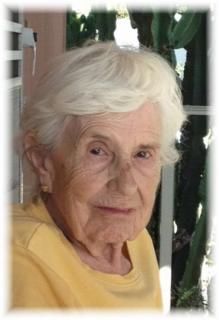 Funeral Services: Will be held on Saturday, February 28, 2015, at 11:00 a.m. at the Steen Funeral Home in Greenfield with burial at the Greenfield Cemetery. Pastor David Kincaide will officiate the service. A luncheon will be held at the First Presbyterian Church in Greenfield following the committal services at the cemetery.

There will be no visitation on Friday.

Memorials: To the Ethelyn Rhodes memorial fund to be established by the family at a later date.

Ethelyn (Eth) Rhodes was born April 24, 1916, to Ellis William and Elizabeth Ellen (Peers) Wolfe at the family farm in Greenfield, IA and passed away on February 21, 2015 in Irvine, California.

Ethelyn graduated from Greenfield High School in 1934 - she never forgot her Greenfield classmates and would return to class reunions.

Ethelyn married Don Rhodes on January 15, 1936 in Greenfield, IA and they were the parents of two children, Donna Rea and Darryl Ellsworth.

Ethelyn and Don started their married life in Greenfield; then moved to Glidden, IA, and from there, they moved to Corning, IA, where they spent many years, before Don’s job took them to Costa Mesa, California; where he was the city inspector of Newport Beach. Ethelyn was a homemaker and a very caring person. She enjoyed spending time outdoors in her flower garden, tending her flowers. Ethelyn was a night owl; she enjoyed staying up late and watching the nighttime talk shows. She was also an avid sports fan. She loved to read the daily newspaper and would read out loud to anyone who would listen. Eth (as she was known to her family and friends) shared a positive outlook to life and she welcomed everyone into her circle of friends, with a smile and a friendly greeting.

She was a member of the Order of Eastern Star.

Ethelyn enjoyed visits from her sister, Mildred, during the winter months (after Mildred retired) and later, their brother, Bill, would join them. During the months they were apart, Sunday was the day to make phone calls; usually Mildred and Bill calling Ethelyn to catch up on the family and community news. Eth made annual trips back to Iowa to visit family (as long as her health allowed).

To order memorial trees or send flowers to the family in memory of Ethelyn Rhodes , please visit our flower store.
Send a Sympathy Card