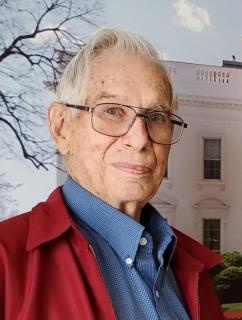 Celebration of Life Graveside Services: Will be held on Saturday, June 6, 2020, at 10:30 a.m. at the Fontanelle Cemetery with full military graveside rites by Fontanelle American Legion Carlson Post No. 247. Per Gene’s wishes, you are asked to come to the Steen Funeral Home in Fontanelle on Saturday by 10:15 a.m. to go in procession to the cemetery with the family, please stay in your vehicles at the funeral home, you may get out of them at the cemetery. Mr. Phil Cannon will officiate the service. The Steen Funeral Home in Fontanelle is in charge of the professional arrangements.

Due to state and federal guidance on gatherings due to the COVID-19 pandemic, Social Distancing will be practiced at the Steen Funeral Home and Cemetery.

Memorials: In lieu of flowers memorials may be directed to the Fontanelle Volunteer Fire Department.

Eugene (Gene) Arthur Jensen was born June 14th, 1930 in rural Fontanelle to John and Margaret (Jacobs) Jensen. He died peacefully in his home, June 1st, 2020, just days before what would have been his 90th birthday, with his wife of 64 years, LaVonne at his side. Gene was known to be a soft spoken man with a big heart. He accepted Christ into his life and was a member of the Gospel Chapel in Greenfield.

Eugene grew up on a family farm with brothers Laurence of Lakewood, CO, Rolan wife Marilyn of Fontanelle, IA and Gary wife Lillie of Des Moines, IA and one sister Marjorie Westphal of Fontanelle, IA. He graduated from Fontanelle High School in the class of 1948. During the Korean conflict he was enlisted into the Army, January 1952 to December 1953, serving his country in Germany in a tank brigade. Upon returning he farmed, raised livestock and milked cows. On May 27, 1956 he was united in marriage to LaVonne (Huff) in Greenfield. They settled into married life on a farm north of Fontanelle.

Eugene worked at the Fontanelle Farmers Coop for 27 years retiring in 1992. After retirement he worked part time at Rolling Hills FS in Canby pulling anhydrous tanks to and from farm fields and designed a new home and moved to town. His love was rebuilding tractors. Not in the standard way but in his vision. Also, he had a love of building and flying scaled replicas of planes. One of his proudest moments was obtaining his private pilot’s license and joining the ADCO Flying Club flying Cessna airplanes. He also built a Pietenpol replica airplane that he named “Fred” and donated it to the Iowa Aviation Museum. Gene also had a way with tools building many clocks, boxes and scaled tractors, airplanes and trucks out of wood. May 21, 2019 Gene took an Honor Flight to Washington D.C. He was amazed by the number of people that came out to cheer them on and the show of flags.

To order memorial trees or send flowers to the family in memory of Eugene Jensen , please visit our flower store.
Send a Sympathy Card