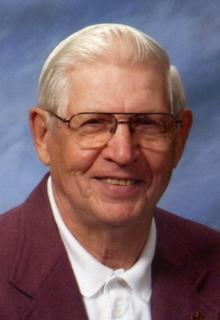 Mass of Christian Burial: Will be held on Friday, January 6, 2017, at 10:00 a.m. at the St. John’s Catholic Church in Greenfield. Father James Ahenkora will officiate the service. Burial will be in the Greenfield Cemetery. Full Military Graveside Rites by Greenfield American Legion Head-Endres Post No. 265 and V.F.W. Post No. 5357. The Steen Funeral Home in Greenfield is in charge of the professional arrangements.

Open Visitation: Friends may call on Thursday, January 5th, at the Steen Funeral Home in Greenfield from 3:00 p.m. to 8:00 p.m.

Family Visitation: The family will greet friends on Thursday evening from 6:00 p.m. to 8:00 p.m. at the Steen Funeral Home in Greenfield.

Memorials: To the Deacon Gene Krawczyk memorial fund to be established by the family at a later date.

Eugene Michael Krawczyk was born November 28, 1933, the son of Michael and Agatha (Bernat) Krawczyk in Bennington, VT. He passed away on Monday, January 2, 2017, at his home in Greenfield, Iowa, at the age of 83.

Gene attended St. Francis De Sales Academy and then graduated from Bennington High School in 1952. He served his country in the United States Navy from 1952 to 1956. Upon returning from the Navy, he attended trade school in New York City for plumbing. He was united in marriage to Louise Urban on August 24, 1957 at Sacred Heart-St. Francis De Sales. To this union four children were born: Steven, Cheryl, Sheryl and Michael. Gene and Louise lived in Bennington where he worked as a plumber, milkman and at Johnson Control where he made car batteries, etc.

On June 5, 1993, Gene was ordained Deacon in Burlington, VT. Deacon Gene and Louise went to visit Michael and his family in Greenfield in 1998. They liked the area and the people and after much thought and prayers they decided a change in their lives was in order. They purchased an acreage about five miles north of Greenfield on Jordan Avenue and in 2010 they moved into Greenfield. Deacon Gene enjoyed hunting, fishing, golfing, horses, dancing and the outdoors.

To order memorial trees or send flowers to the family in memory of Eugene Krawczyk , please visit our flower store.
Send a Sympathy Card