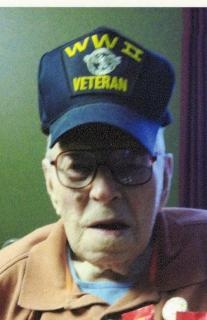 Graveside Services: Will be held on Saturday, June 15, 2019, at 10:00 a.m. at the Greenfield Cemetery. Full Military graveside rites will be conducted by the Greenfield American Legion Head-Endres Post No. 265 and V.F.W. Post No. 5357. Pastor Eric Schubert will officiate the service.

In 1942, Pat went into the Army where he would spend the next three years of his life, achieving the Rank of Corporal. He served his country proudly during World War II.

On June 6, 1944 six hours after the initial invasion of Normandy (D-day), Pat landed on the beach and drove ashore with the 735th Tank Battalion, of which he was a truck driver hauling gas, tank track, ammunition, etc., to the front lines keeping tanks supplied. From there he went through a total of 8 campaigns with the war ending at the Battle of the Bulge in Belgium on January 16, 1945.

Upon discharge from the Army, Pat became self-employed as a livestock hauler.

In 1955, Pat returned to Schildberg Construction Company where he would work the next 31 years until retiring in 1986.

In 1948, Pat married Frances Louise Culver of Creston, Iowa, at the Presbyterian parsonage in Greenfield. To that union 2 sons were born: Eugene Jr. and Guy.

Pat is also survived by 6 Great Grandchildren and several nieces and nephews.

The family of Pat Thompson wishes to express their gratitude to Good Samaritan Nursing Home of Fontanelle, Kindred Hospice of Panora, and Ed Christensen of Greenfield for all their loving care and acts of kindness.

To order memorial trees or send flowers to the family in memory of Eugene Thompson , please visit our flower store.