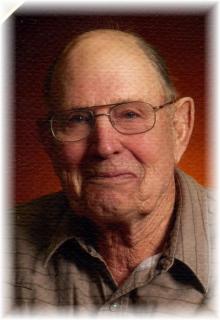 Celebration of Life Services: Will be held on Friday, April 12, 2013, 1:30 p.m. at the St. John’s Catholic Church in Greenfield with burial in the Fontanelle Cemetery. Full Military Graveside Rites will be held by the Fontanelle American Legion Carlson Post No. 247. A luncheon will follow the burial at the church.

Visitation: Will be held on Thursday, April 11th from 1 p.m. to 8 p.m. at the Steen Funeral Home in Fontanelle with the family greeting friends from 6 to 8 p.m. on Thursday evening.

Memorials: To the Eugene Westphal memorial fund to be established by the family at a later date.

Eugene (Gene) Robert Westphal left this world a better place, surrounded by his son and daughter, on April 9, 2013 at the Good Samaritan Society in Fontanelle. He was born September 12, 1923, to Robert Frederick and Ethel(Martin) Westphal on his grandparents farm, north of Fontanelle.

Gene was raised and educated in the Nevinville/Williamson area and later in Fontanelle, graduating from Fontanelle HS in 1941. Gene proudly served his country 1945-1947 with the US Army, Anti tank 350th Infantry Reg. He was a stable sergeant, in charge of the horses that he loved. He was stationed in Italy. It was here that he met his beloved Maria at the American Red Cross. They were married on April 1, 1947 in the parsonage of St John’s Catholic Church in Greenfield. To this loving, 59 year union, two children were born, Larry and Mary.

Gene loved farming and took great pride in stewardship of the land and milking cows, raising cattle, sheep, hogs and horses. He was happiest on a horse or a tractor and had an infinite wisdom for the care of any animal. He was also employed at Carlson’s Super Valu and Parr Mfg. He had a passion for dogs, horses and gardening.

He and Maria left the family farm in September, 2000 and moved to town. After Maria’s passing he moved to Oak Village in Greenfield. In October, 2012, he became a resident at the Good Samaritan Society in Fontanelle.

Gene was a 63 year member of American Legion Carlson Post 247. He was also a member of St. John’s Catholic Church and had previously served on the boards of Good Samaritan Society and Adair Co. Extension.

He was preceded in death by his wife Maria; his parents; in-laws, Enrico and Margherita (Trotti) Narizzano;and brother-in-law, Hugo Narizzano.

Gene will be remembered for his willingness to help others, his sense of humor, shining smile and most importantly his great love for God and his family.

He will be greatly missed by all who were blessed to know him.

To order memorial trees or send flowers to the family in memory of Eugene Westphal , please visit our flower store.
Send a Sympathy Card