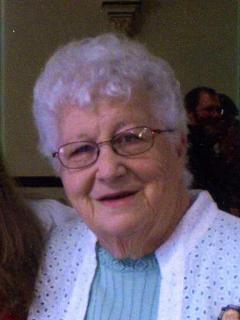 Celebration of Life Services: Monday, October 18, 2010, at 10:30 a.m. at the Emmanuel Lutheran Church in Fontanelle with burial in the Fontanelle Cemetery. A luncheon will follow the burial at the church.

Memorials: To the Evelyn Baudler Memorial Fund to be established by the family in care of the Steen Funeral Home, P.O. Box 390, Greenfield, Iowa 50849.

Evelyn Lorraine Baudler was born on October 18, 1929 to William and Ellen Purdy Finck. She passed away at her home in Fontanelle on October 15, 2010 at the age of 80 years.

Evelyn spent most of her life in the Fontanelle area. She graduated from Fontanelle High School. After graduation she attended teacher college in Creston, Iowa and then taught country school north of Fontanelle. She later taught in Richland and Cromwell. She owned and operated the Twilight Café in Fontanelle for a number of years and then later worked in the bakery at Carlson’s Super Value in Greenfield and retired from the Good Samaritan Center in Fontanelle in 2006 after working there for 12 years in the kitchen and finally as an activity aide.

On June 4, 1950 she married Lyle Stoner at the Congregational Church in Fontanelle, Iowa. They had two sons, Randall and Rodney. They lived in Orient until Lyle’s death. She married Arthur Baudler in Papillion, Nebraska on December 18, 1965 and together had five children, Shelly, Sherry, Christopher, Martha and Jonathan. Together they raised their family in Fontanelle.

Evelyn had a passion for cooking and baking, and would always have numerous requests for “noodles” at any family gathering or holiday.

Evelyn was very active in her community and in her church. She served as a girl scout leader and on the Fontanelle Enterprise Club for many years planning many community events. She was generous with her time and volunteered time with activities at the Good Samaritan Center even after she retired. She also shared her time with her church in her later years serving on the hospitality committee there. She also enjoyed helping to plan and participate in the social activities at Summerset Estate apartments, where she lived the last six years of her life. She enjoyed putting together puzzles and reading as well as her extended family at Summerset Estates. Evelyn also enjoyed the lunches she spent with Barb Lowry in the past year as Barb and her daughter, Laurie Welch, were of great assistance to her, after her surgery last year.

To order memorial trees or send flowers to the family in memory of Evelyn Baudler , please visit our flower store.
Send a Sympathy Card