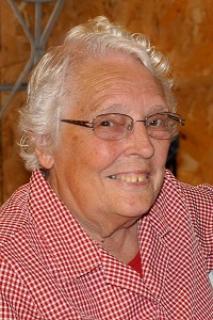 Funeral Services: Will be held on Saturday, March 2, 2019, at 11:00 a.m. at the Greenfield Gospel Chapel in Greenfield. Mr. Phil Cannon will officiate the service. A luncheon will be held at the church immediately following the services.

Family Visitation: The family will greet friends on Saturday, March 2nd, one hour prior to services at the church.

Memorials: May be made to the Evelyn Karas memorial fund to be established by the family at a later date.

Evelyn Irene Karas was the oldest of four children born to John G. and Sophia M. (Kloppenburg) Karstens, on November 10, 1929 in rural Franklin Township, Cass County, Iowa. She grew up in the Wiota, Cumberland, and Massena areas and graduated from Massena High School in 1948. Evelyn lived her entire life on the farm and had many fond memories of helping her “daddy” take care of the animals and riding her beloved pony, Spot. After graduation, Evelyn became a nurse assistant at Atlantic Memorial Hospital and worked there for a year until she was called back home to care for her maternal grandfather until his death.

It was during this time that she met and fell in love with a tall and lanky young man named Gerald. They were married on May 4, 1949 and, through the next several years, they were blessed with three sons: Doyle, Galen, and Dennie.

Gerald and Evelyn farmed their entire married life in Union, Taylor, and Cass Counties. Evelyn was a devoted farm wife and mother. She worked very hard caring for her young family and helped on the farm by milking cows, feeding hogs, raising chickens, and butchering them when her family needed something for the supper table. Evelyn also raised a large garden every season and canned its bountiful harvest for her family to enjoy. She also baked them bread and made delicious pies, jams, and jellies. Her boys will always remember the beautiful houseplants and flowers that she raised because they were such a treat for their eyes.

Evelyn accepted the Lord Jesus Christ as her personal Savior shortly before she and Gerald were married. “Jesus has been my greatest love ever since,” were the words she penned into the front of each of her grandchildren’s Bibles 45 years later. They rejoice in the fact that she is now in the loving arms of the one who died for her, assured her that her sins were forgiven, and gave her the free gift of life eternal.

Evelyn was preceded in death by her parents, John and Sophia Karstens; her brother Duane, and his wife Barbara; and a great-grandson, Elijah Joseph.

She is survived by her husband of nearly 70 years, Gerald; her children, Doyle and wife Cheryl, Galen and wife Lisa, and Dennie and wife Laura; eight grandchildren, Clinton (Laura) Karas, Justin (Jason) Holling-Karas, Andrew (Melissa) Karas, Peter (Abby) Karas, Monica (Ross) King, Austin (Brooke) Karas, Taylor (Amy) Karas, and Jenna Karas; as well as 21 great-grandchildren. She is also survived by her brother, Kenneth and his wife Jill, and a sister, Eva Simpson and her husband James; many beloved nieces and nephews; and numerous other relatives and friends.

To order memorial trees or send flowers to the family in memory of Evelyn Karas , please visit our flower store.
Send a Sympathy Card