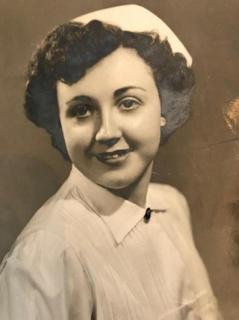 Celebration of Life Services: Will be held on Friday, June 14, 2019, at 10:00 a.m. at the Emmanuel Lutheran Church in Fontanelle with burial in the Fontanelle Cemetery. A luncheon will be held at the church following the services at the cemetery. Pastor Steven Broers will officiate the service. The Steen Funeral Home in Fontanelle is in charge of the professional arrangements. Online condolences may be left to the family at www.steenfunerals.com.

Family Visitation: The family will greet friends one hour prior to services at the church.

Memorials: Memorials may be made to the Evelyn Rater memorial fund to be established by the family.

Evelyn June (Feick) Rater was born March 12, 1933 on the family farm southwest of Fontanelle to parents Edwin F. and Helen P. (Huntington) Feick. She passed into the arms of Jesus at Accura Healthcare in Carroll on April 24, 2019 at the age of 86.

Evelyn graduated from Bridgewater-Fontanelle High School in 1951 and from Iowa Lutheran School of Nursing in Des Moines in 1954. She initially worked as a Registered Nurse in Chicago, Illinois; Tucson, Arizona; Atlantic, and Adair County.

Evelyn later worked at Greene County Hospital in Jefferson; Municipal Hospital, Bethesda Care Center, and the Mental Health Institute (MHI) all in Clarinda. She was also a nurse in Maryville, Missouri; with Adams County (Iowa) Public Health, and at the hospital in Winterset.

Evelyn moved to West Des Moines in 1984. She worked at a nursing home in Altoona, Broadlawns Hospital in Des Moines, Woodward State Hospital, and the Iowa Veterans Home in Marshalltown. Evelyn enjoyed her work as a nurse in a variety of different settings. She officially retired in 2000, after 30 years with the State of Iowa.

Evelyn was preceded in death by her parents, Ed and Helen Feick; her ex-husband Dan; and her two sons Robert and Ronald Rater.

Evelyn will be remembered most for her unwavering faith, sharp wit, and independent spirit.

To order memorial trees or send flowers to the family in memory of Evelyn Rater , please visit our flower store.
Send a Sympathy Card