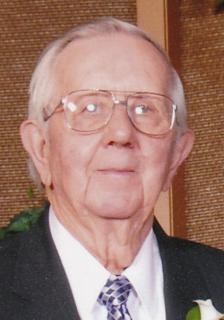 Funeral Services: Will be held on Saturday, November 30, 2019, at 10:30 a.m. at Our Saviour’s Lutheran Church in Audubon with burial in the Maple Grove Cemetery in Audubon. A luncheon will be held at the church following the committal services at the cemetery. Pastor Ben Unseth will officiate the service. The Steen Funeral Home in Greenfield is in charge of the professional arrangements.

Family Visitation: The family will greet friends on Friday at Our Saviour’s Lutheran Church in Audubon from 5:00 p.m. to 7:00 p.m.

Memorials: In lieu of flowers memorials may be made to the Everett Wendt memorial fund to be designated by the family at a later date.

Everett Merle Wendt, the son of Fred and Sophia (Grulke) Wendt, was born April 12, 1925 on a farm near Walnut, IA. He was the youngest of 8 children. Everett grew up in Audubon County and attended country school.

On June 21, 1945, Everett was united in marriage to Wynona Andersen at Merrill’s Grove Baptist Church in Fiscus, Iowa and this union was blessed with two daughters, Sherry Jo and Carol Ann. Everett was a lifelong farmer. He started to farm with Lars Madsen and Raymond Merk. For many years, he farmed with Wynona’s parents, Mads and Emma Andersen and was later joined by his daughter Carol and her husband on the farm. Everett and Wynona worked hand in hand on the farm raising row crops, bailing hay and raising cattle, hogs and chickens. In addition, Everett sold Lansman Seed Corn for several years. Following an injury on the farm, he started Everett Wendt Trucking and hauled for many area farmers. In 1997, Everett and Wynona moved from the family farm into their current home in Audubon.

Everett was a longtime member of Our Saviour’s Lutheran Church in Audubon and over the years he had served on the Church Council. He enjoyed hunting, camping, traveling, picnics, going to the dog races and playing Bingo. Above all, family was everything to him and he cherished each moment with them. He enjoyed attending his daughter’s activities and later his grandchildren’s and great grandchildren’s. He always looked forward to Sunday outings with his family, attending family reunions and holiday celebrations. Over the years, Everett and Wynona enjoyed going out to eat, attending Trucker’s Conventions, wintering in Arizona, visiting with neighbors and playing cards with other couples.

Everett is survived by his loving wife of 74 years, Wynona Wendt of Audubon; two daughters, Sherry Jo Coufal and Bobby Neal of Omaha, NE and Carol Root and Dave Kneeskern of Greenfield, IA; two grandsons and their family, E. Jason Coufal and wife Victoria and their daughter Kyana of Omaha, NE and Travis Root and wife Samantha and their son Landry of Dakota Dunes, SD; one brother, Ervin Wendt of San Diego, CA; one sister, Genevieve Bishop of Lenexa, KS; several nieces; nephews; other relatives and many friends.

He was preceded in death by his parents; son-in-law, Lanny Coufal and five siblings: Marvin in infancy, Winnifred Murray, Wilbur Wendt, Alma Tessman and Evelyn Tessman.

To order memorial trees or send flowers to the family in memory of Everett Wendt , please visit our flower store.