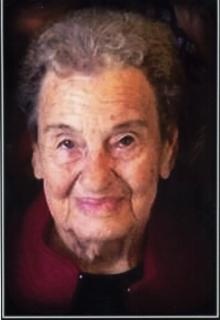 Funeral Services: Will be held on Monday, May 4, 2015, at 1:00 p.m. at the Steen Funeral Home in Greenfield with burial at the Greenfield Cemetery. Fay’s favorite, pie and coffee will be served at the Kramer’s Café in Orient following the committal services at the cemetery. Hospice Chaplain, Terry Roberts will officiate the service.

Family Visitation: The family will greet friends on Monday one hour prior to services at the Steen Funeral Home in Greenfield.

Memorials: Memorials may be directed to the Orient Fire Department or to the HCI-Greater Regional Hospice House in Creston.

Velma Fay Mathiews, daughter of Manley and Letha (Shirley) Farrington, was born September 21, 1919 in Eastland County, Texas. Following a brief illness, she passed away on Thursday, April 30, 2015 at the HCI-Greater Regional Hospice House in Creston, Iowa at the age of 95. She had been blessed with a long, healthy, happy, active life.

Fay grew up in Texas where she worked in the cotton fields with her family. Texas was always home to Fay and everything was always bigger and better in Texas. She worked for a year at Consolidated Aircraft Corporation with her twin sister May in Fort Worth during WWII. She was a patriotic woman who loved doing her part for “the boys” as a “Rosie the Riveter” worker.

On April 18, 1942 Fay was united in marriage to Leonard E. “Spud” Mathiews in Mineral Wells, Texas. After Spud’s discharge from the Army in 1945, they farmed in Eastland County, Texas until January, 1960 when they and their two children moved to a farm between Orient and Richland. In 1965 she began working for the O-M school district as a cook. It was a job she found gratifying for thirty years. After Spud’s death in 2001, she moved to Orient where she lived happily with her apartment-mates until her death.

Fay was a woman of deep faith. She remained a member of Mangum (Texas) Baptist Church and enjoyed worshiping with several television ministries during the last several years.

Fay and May had lots of fun being identical twins and had a very special bond only twins would understand. They were known for laughing until they were in tears!

She was most happy cooking for her family and also being outside. She loved to work in her garden and enjoyed canning and freezing the produce. Other activities she liked were going for drives, going out for lunch, having pie and coffee in the afternoon, congregate meals, and going for coffee six mornings a week at the Orient bank.

She is survived by her daughter Letha Maynes (Butch) of Greenfield and her son Earl Mathiews (Pam) of Orient and their families, her special nieces and nephews, one sister-in-law, other relatives and friends.

To order memorial trees or send flowers to the family in memory of Fay Mathiews , please visit our flower store.