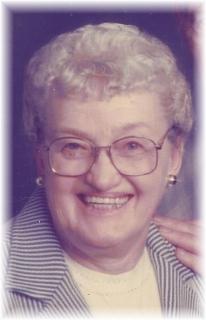 Funeral Services: Will be held on Monday, February 10, 2014, at 2:00 p.m. at the Steen Funeral Home in Greenfield with burial at the Greenfield Cemetery. Mr. Ted Burnfield will officiate the service. A luncheon will be held at the Nodaway Diner following the committal services at the cemetery.

Family Visitation: Will be held on Monday, Feb. 10th one hour prior to services at the Steen Funeral Home in Greenfield.

Memorials: To the Bethel Baptist Church.

Fern was baptized in infancy. She was instructed in the Doctrine and Duties of the Christian Religion as believed, confessed, taught by the Evangelical church and received her certificate by Rev. Granner December 21, 1930. Scripture Motto II Corinthians 5:17 “Therefore if any man be in Christ, he is a new creature, old things are passed away behold all things are become new.” Fern accepted Christ as her Lord and Savior at an early age, and joined the evangelical Church which she was an active, faith follower holding offices in the church.

Fern was graduated from Paton High School May 25,1933.

Prior to her marriage Fern was employed in the IBM Department of the United Security Life Insurance company Des Moines Iowa.

Fern and Everett Smith were united in marriage at First Church of the Open Bible, Des Moines Iowa by Everett’s nephew Donald Dean Benton. They established their home on a farm northeast of Greenfield. Fern’s church membership transferred to the Bethel Baptist church at Stanzel. She took an active part in the church holding offices in the church. Fern respected her parents was baptized by emersion. Fern like Everett believed to witness through the giving of Gospel tracts. The Christian as a citizen has to be concerned about one’s country founded on Christian Principles.

Fern and Everett moved into the town of Greenfield into Smith Aunt’s house on November 18, 1987.

Fern was preceded in death by her twin brother Paul in infancy, her parents, her husband Everett December 30, 1990 and brother in law Harold E Saathoff November 18,2008.

Fern is survived by her sister Ruth E Saathoff of Sun City Arizona and nieces Jeanne Gregg and DeeAnn Carlick of California, and other relatives and friends.

To order memorial trees or send flowers to the family in memory of Fern Smith , please visit our flower store.
Send a Sympathy Card