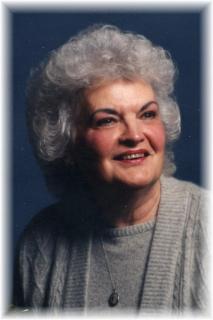 Funeral Services: Will be held on Thursday, September 27, 2012, at 11:00 a.m. at the Greenfield United Methodist Church with burial in the Greenfield Cemetery.

Family Visitation: The family will greet friends on Wednesday, September 26th, from 5:00 p.m. to 8:00 p.m. at the Steen Funeral Home in Greenfield.

Memorials: To the Flossie Murray Zimmerline Memorial Fund to be established by the family.

Florence was baptized on June 11, 1941 at the Trinity Lutheran Church in Ellsworth. She was confirmed at the English Lutheran Church in Duncombe, Iowa. She attended rural country school in Hamilton County and she graduated from high school in Webster City, Iowa in 1947.

On January 25, 1948 Florence was united in marriage at the Lutheran Church in Stratford, Iowa to John C. Murray from Essex, Iowa. To this union two children were born, Tamara and Bradley.

Florence and John lived in Red Oak, Iowa Falls, and Washington, Iowa before coming to Greenfield in 1955 to become employed by the Bickford Funeral Home – later to become the Murray Funeral Home. They also were owners of the Ewing Funeral Home in Fontanelle. Florence became a member of the Greenfield United Methodist Church on March 25, 1956. After retirement, they spent some time in Omaha with their daughter, Tamara, and in Austin, Texas with their son, Brad. John passed away on December 4, 1989.

Florence assisted her husband in the funeral business. She also worked as a fashion consultant for Peck & Peck Ladies Apparel in Omaha and Austin; Bridal Boutique in Des Moines; Mi Ladys Fashions, and Country Hearts Gift Shop in Creston. Florence loved working with the general public.

Florence married Floyd J. Zimmerline on June 4, 1994. They enjoyed Floyd’s son, Ronny, and his activities with the Special Olympics. They traveled to New York, Florida, Texas, Colorado and New Mexico. They loved golfing and dancing. Floyd passed away on December 7, 1999.

Florence loved playing golf and won the city tournament one year. She enjoyed all sports, and attended many sports and music events at Greenfield High School. Florence loved doing the wedding receptions at her church. She was a Circle leader for several years and active in UMW, and she served on the Worship, Council, and Memorial church committees. She also participated in Progress Club, Mother’s Club, American Legion Auxiliary, Hospital Auxiliary, Bridge Club, and the Greenfield Country Club. She enjoyed her bus trip to Washington D.C., Cape Cod, and Manhattan, N.Y. Florence loved visiting and helping senior citizens. She took great pride in her home and family. She was known for her smiling eyes and looking neat.

To order memorial trees or send flowers to the family in memory of Flossie Murry-Zimmerline , please visit our flower store.
Send a Sympathy Card