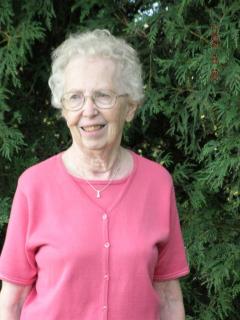 Funeral Services: Will be held on Tuesday, April 3, 2012, at the Fontanelle United Methodist Church at 10:30 a.m. Pastor Cathy Nutting will officiate the service. Burial will be in the Fontanelle Cemetery.

Visitation: Will be held on Monday at the Steen Funeral Home in Fontanelle from 4:00 p.m. to 8:00 p.m. with the family greeting friends from 6 to 8 p.m.

Frances Pauline Bower was born April 4, 1923, in Des Moines, Iowa, the daughter of Sadie Elizabeth (Dahlgren) Rosenquist and Emanuel Charles Rosenquist both of whom were born in Sweden. She passed away on Friday, March 30, 2012, at the Adair County Memorial Hospital in Greenfield at the age of 88.

Fran graduated from North High School in Des Moines in 1941 and worked in the Auditing Department of Central Life Insurance Company for five years. On August 30, 1946, she was united in marriage to Marlan E. Bower of Bridgewater. They became the proud parents of two sons, Robert and Dennis. They lived in Des Moines, where Marlan had employment. A year later they moved to a farm near Grimes, prior to moving to a farm north of Bridgewater. After 30 years on the farm, they moved to Fontanelle, December 1979. In 2002, Fran moved to Oak Village in Greenfield. Fran was a member of the American Legion Auxiliary Post 247, a member of Fontanelle Methodist Church and was an active member of the United Methodist Church Women and quilters group. She loved being with her children and grandchildren. Her family was important to her.

To order memorial trees or send flowers to the family in memory of Fran Bower , please visit our flower store.
Send a Sympathy Card