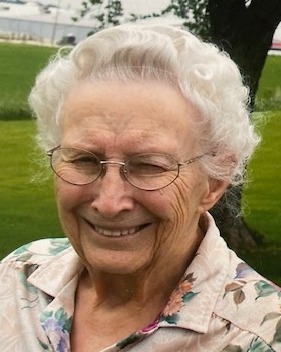 Memorials:  May be directed to the Francine Combs Memorial Fund to be established by the family at a later date.

Francine Ernestine Combs was born July 11, 1920, the daughter of Cecil Allen and Angele Elisa (Petitjean) Stedman in France.  She passed away on Thursday, December 8, 2022, at the Greenfield Rehabilitation and Health Care Center in Greenfield, Iowa, at the age of 102.

Francine was four months old when she came to the United States.  She graduated from Greenfield High School and lived her entire life in Greenfield.  She married John Frank Combs on March 6, 1941 and to this union four sons were born: John, Dan, David and Dennis.

Francine worked as a waitress in Greenfield and started her career in 1938 at Joy Ann’s, then at the Phoenix Café in Greenfield.  Through the years she worked at the Maid-Rite, Bon’s Bakehouse and the Nodaway Diner.  She retired at the age of 84 in 2004.  She was active in the Greenfield United Methodist Church, Red Cross Blood Mobile and American Legion/V.F.W.  She did an enormous amount of volunteering throughout her life, she was a very caring, giving lovely lady!

She was preceded in death by her parents; husband Frank in 1986; and brother, Dan Stedman.

To order memorial trees or send flowers to the family in memory of Francine Combs, 102, of Greenfield, please visit our flower store.

Burial will be in the Greenfield Cemetery following the funeral service.