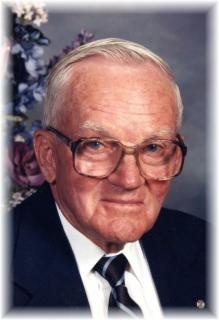 Funeral Services: Will be held on Tuesday, December 13, 2011, at 10:00 a.m. at the Immanuel Lutheran Church in Greenfield with burial in the Greenfield Cemetery. Full military graveside services will be conducted by the Greenfield American Legion Head-Endres Post No. 265 and V.F.W. Post No. 5357.

Visitation: Will be held on Monday at the Steen Funeral Home in Greenfield from 2:00 p.m. to 8:00 p.m. with the family greeting friends from 6 to 8 p.m.

Francis Warren Madison was born January 7, 1921, to Andy and Florence (Lewis) Madison in Jackson Township, Adair County, Iowa. He passed away December 9, 2011, at the age of 90 years, 11 months and two days.

Francis grew up in Adair County and graduated from Fontanelle High School in 1938. He was united in marriage to Kathryn Schrader on January 16, 1944, in Colorado Springs, Colorado, where Frances was stationed while serving in the Army Air Corps. They lived there near the air force base for almost two years; after his discharge, they moved to a farm in Adair County. To this union two children were born: Sheila and Daniel. They worked side by side farming until 1974 when they moved into Greenfield. Kathryn passed away in 1994.

Following his retirement from farming, Francis was a custodian for the Greenfield schools for nine years. After that, he worked as a maintenance man for the Senior Citizen Apartments for many years.

He enjoyed working with wood, fishing, making pies for contests, playing cards and giving and helping others.

He was preceded in death by his wife, his parents, two brothers, and a sister.

To order memorial trees or send flowers to the family in memory of Francis Madison , please visit our flower store.