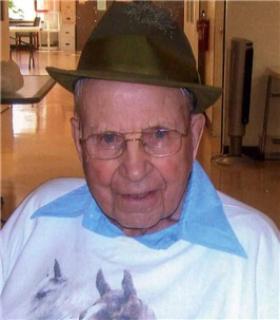 Funeral Service:  Tuesday, Sept. 14, 2010, at Steen Funeral Home in Greenfield at 2:00 p.m. with burial in the Greenfield Cemetery.

Frank Dewey Sevier was born on March 27, 1909, in Creston, Iowa, the son of William and Ella (Odell) Sevier.  He passed away on Saturday, September 11, 2010, at the Greenfield Manor at the age of 101.
Frank’s dad came from Kentucky in a covered wagon and settled in Creston.  He was raised and attended school through the 8th grade in Creston.  He had to work to help support his family of eleven children.  He worked for farmers plowing fields with a team of horses and picking corn by hand.  Also went to California to help build war ships for the boys in the service.  The ring he wore was made from a nut off of a ship that was torpedoed and came back to dry dock to be repaired.
On October 4, 1933, he was united in marriage to Mildred Estella Brown in the Jordan Memorial Methodist Church in Des Moines, Iowa.  To this union two children were born, Teddy and Marilyn.  They lived near Bridgewater and moved to Greenfield in 1938.  Frank worked for Gross Manufacturing as a welder for many years.  He loved raising horses, going to his farm, and vacationing.
He was preceded in death by his parents; wife Mildred in 1986 and seven brothers, Vernard, Clarence, Harold, Warren, Lloyd, Cecil, and Eugene; and three sisters, Irene, Pauline, and Ruth.
He is survived by his two children, Teddy Sevier and wife Armadean of Des Moines and Marilyn Harter and husband Bill of Greenfield; four grandchildren, Rod Harter and wife Julie, Val Faust and husband Carl, Rick Sevier and wife Yolanda, and Robin Kingery and husband Wilbur; eight great grandchildren, Bridgett Harter and significant other Jason Wallace, Paige and Connor Faust, Isaac, Maggie, Angie, Tegan, and Ian Sevier, and Zachary and Micaila Kingery; two great-great grandchildren, Braxton and Damon Wallace; other relatives and friends.

To order memorial trees or send flowers to the family in memory of Frank Sevier , please visit our flower store.
Send a Sympathy Card