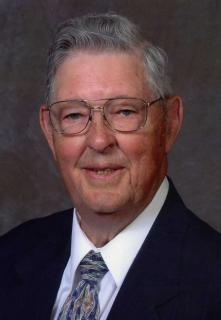 Fred Burcham, 90, of Greenfield (formerly of Fontanelle) passed away on Thursday, September 16, 2010, at the Greenfield Manor.

Celebration of Life Services:  Monday, September 20, 2010, at 10:30 a.m. at the Fontanelle United Methodist Church with burial in the Fontanelle Cemetery with full military graveside rites by the Fontanelle American Legion Carlson Post No. 247.  A luncheon will follow the burial at the church.

After the death of his mother in 1930, their family moved to Shamrock, Texas, where he graduated from high school. He joined the Marine Corps in 1940 and served in World War II in the Pacific. On April 29, 1944, he was united in marriage to Betty Bailey. To this union three children were born, Barbara, Judy, and Marilyn.

In December 1946, they moved to Fontanelle making it their home until moving to Greenfield in 1998. Fred farmed and in 1958, he began his career in the U.S. Postal Service and served as Postmaster in Fontanelle for many years. He enjoyed gardening, watching birds at his feeders, going to congregate meals, coffee club, and golfing. He was a member of the American Legion, United Methodist Church and the Masonic Lodge.

He was preceded in death by his parents; wife, Betty in 2005; sister, Lillian Adams; grandson, Travis Smith; and son-in-law, Jim Rollins.

To order memorial trees or send flowers to the family in memory of Fred Burcham , please visit our flower store.
Send a Sympathy Card