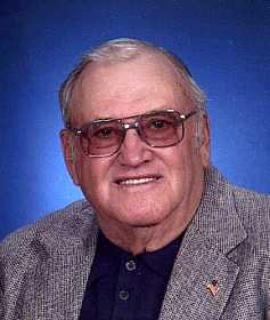 Funeral Services: Thursday, September 30, 2010, at 10:30 a.m. at the Greenfield United Methodist Church with burial in the Greenfield Cemetery with full military rites by Menlo American Legion Glover-Butler Post No. 511. A luncheon will follow the burial at the church.

Family Visitation: Wednesday evening from 5:00 p.m. to 7:00 p.m. at the Steen Funeral Home in Greenfield. In honor of Gene feel free to wear your bib overalls to visitation.

Lyle Gene Livingston was born on February 26, 1932, in Madison County, Iowa, the son of Clarence Elwood and Blanche Mae (Ham) Livingston. He passed away on Sunday, September 26, 2010, at the Adair County Memorial Hospital in Greenfield, Iowa, at the age of 78.

Gene was raised and grew up in the Hebron area. He graduated from Zion High School in 1950. After graduation he attended auctioneer school in Mason City, Iowa. He served his country in the U.S. Army in Korea from 1953 to 1954. On February 12, 1956, he was united in marriage to Carolyn Joy Woodson in the Hebron United Methodist Church. To this union two children were born, Jeffrey and Joy. He farmed on the current century farm since 1956. He was also an auctioneer. A highlight was auctioneering each year at the 4-H sale at the county fair.

Gene was a member of the Jefferson Center Church, American Legion, Pork Producers, served on the Adair County Extension council, and was a 4-H leader for many years. He had worked at the Stuart Livestock Auction, Madison County Livestock Auction and Cardinal IG. He dearly loved being with his grandchildren, raising livestock, especially his cattle, visiting with family and friends, and going to coffee.

He was preceded in death by his parents and wife, Carolyn in 2002; brother, Jack Livingston; and sister, Lila Jackson.

To order memorial trees or send flowers to the family in memory of Gene Livingston , please visit our flower store.
Send a Sympathy Card