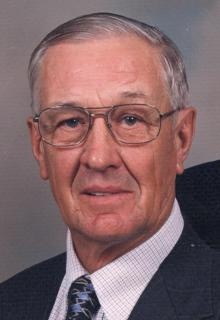 A memorial reception to celebrate the life of George Ehm: Will be held February 23, 2020 from 3:30pm to 5:00pm at the Greenfield Rehabilitation & Health Care Center located at 615 SE Kent, Greenfield, IA.

Memorials: To the George Ehm memorial fund to be established by the family at a later date.

George Henry Ehm was born on September 7, 1930, to Joseph & Ottilie Ehm 2 miles west of Greenfield on top of Robinson’s Hill. The Joseph Ehm family lived at that location until 1937 then moved southeast of Greenfield for 2 years and in 1940 settled at their current location 9 miles southwest of Greenfield. George attended Richland school where he graduated in 1948.

George continued to farm with his father / parents and was drafted into the Korean War for approximately 2 years. Upon returning home, he was united in marriage to Betty Jane Brown on August 14, 1954, at St. Edwards Catholic Church in Afton, Iowa. To this union seven children were born: Stephen, Paul, Rose, John, Mary, Helen and Karen.

George enjoyed farming and being outside. He was very handy and a talented craftsman at woodworking. He built and remodeled many farm buildings and portions of their home. Taking care of the land and his farm equipment was a high priority. He loved being outside and being with nature.

George enjoyed when neighbors would gather for thrashing and corn shelling to help each other. He was always lending a hand to farmer friends in need. George and Betty both helped many people in the community throughout their life.

George grew up in a home that spoke German and he enjoyed speaking German over the years when he had the opportunity. In 1998, George and Betty traveled to Germany where his parents had immigrated from to visit his relatives still residing there.

Around sun down on Friday, January 3, 2020, George passed away from this life at the Greenfield Rehabilitation and Healthcare Center.

He was preceded in death by his wife, his parents and five of his siblings.

To order memorial trees or send flowers to the family in memory of George Ehm , please visit our flower store.