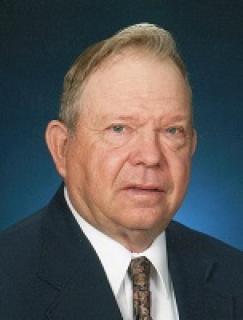 Mass of Christian Burial: Will be held on Monday, July 9, 2018, at 11:00 a.m. at the St. John’s Catholic Church in Greenfield with burial in the St. Mary’s Cemetery northwest of Bridgewater with full military graveside rites by William Thompson American Legion Post No. 703 of Bridgewater.. A luncheon will be held at the church immediately following services at the church prior to burial. Father James Ahenkora will officiate the service.

Family Visitation: The family will greet friends on Monday morning one hour prior to services at the St. John’s Catholic Church.

Memorials: May be directed to the George Kordick memorial fund to be established at a later date.

George Martin Kordick was born November 5, 1938, the son of Edwin John and Jennie Naomi (Martin) Kordick on a farm northwest of Bridgewater, Iowa. He passed away on Thursday, July 5, 2018, at the Good Samaritan Society in Fontanelle, Iowa, at the age of 79.

George lived on the same farm he was born on his whole life except for six months in the Army Reserves. He attended grade school at Jackson Township #5 and graduated from Bridgewater High School. On September 11, 1965, he was united in marriage to Helen Tapken in the St. Patrick’s Catholic Church in Massena. To this union three children were born: Richard, Robert and Donna. They farmed their entire life on his family farm.

George was a member of the William Thompson American Legion Post No. 703 in Bridgewater, St. John’s Catholic Church and the Knights of Columbus. He enjoyed hunting, fishing, airplanes, WW II history, ham radio, tractor restoration, time spent at the Bridgewater Café with friends, watching favorite westerns and especially spending time with his children and grandchildren.

He is survived by his wife, Helen Kordick of Bridgewater; children, Richard Kordick and wife Kirsten of Tipton, Iowa, Robert Kordick and wife Melissa of Davenport, Iowa and Donna Moore and husband Brent of Ames, Iowa; 11 grandchildren, Taylor, Kyley and Carson Kordick, Anton and Carl Kordick and Stephen, Katherine, Michael, Anne, Elizabeth and Madeleine Moore; other relatives and friends.

To order memorial trees or send flowers to the family in memory of George Kordick , please visit our flower store.
Send a Sympathy Card