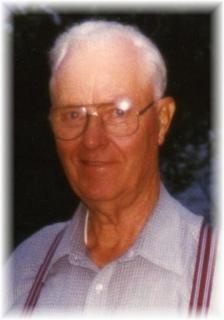 Gerald Herrick passed away on Sunday, September 9, 2012, at the Greenfield Manor.

Funeral Services: Will be held on Saturday, September 15, 2012, at 10:00 a.m. at the Steen Funeral Home in Greenfield with burial in the Greenfield Cemetery. A luncheon will follow at the Cornerstone Fellowship Church in Greenfield.

Visitation: Will be held on Friday at the Steen Funeral Home in Greenfield from 5 p.m. to 8 p.m. with the family greeting friends from 6 to 8 p.m.

Memorials: To the Gerald Herrick memorial fund to be established by the family at a later date.

Gerald Herrick, the son of Frank and Sylvia (Bateham) Herrick, was born on September 26, 1915, near Greenfield, Iowa. He passed away at the Greenfield Manor September 9, 2012.

Gerald was raised in Adair County, Iowa, and attended grade school at Grove, Jefferson, and Orient township schools. He graduated from Greenfield High School in 1935. After high school, Gerald began his life-long occupation of farming. He also worked part-time as an electrician during the years rural electrification came to the area, and years later constructed several houses and buildings as a side-line.

Gerald was united in marriage in 1939 to Maxine O Rice, daughter of Ray Rice and Letha Macy Rice. To this union four children were born: Randall, Leo, Linda, and Stanley. He loved his family, and his life was centered on providing for them from the land. He enjoyed attending auctions as a hobby, and he enjoyed working with neighbors. He helped construct the building and parsonage for Bethel Baptist Church and remained a member there, serving the Lord for many years.

To order memorial trees or send flowers to the family in memory of Gerald Herrick , please visit our flower store.