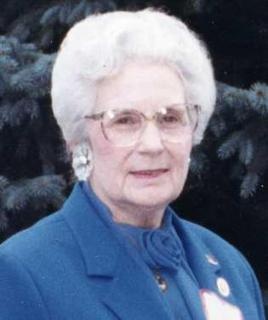 Memorials:  May be directed to the Geraldine Sickels Memorial Fund.

Oma Geraldine Sickels, 95, passed away February 14, 2011 at the Greenfield Manor. Services for Geraldine were held Saturday, February 19, 2011, officiated by Dr. Keith Schweitzer, who has been her Shepherd for the 7 1/2 years while she lived at the Manor.

Geraldine was born November 19, 1915 in Burlington, Kansas to Peter and Cora (Robinson) Anderson. She was baptized in Kansas and moved with her family to Iowa as a young girl. She attended Richland Public School.

In 1933, she married Elmer Kriens and they farmed northwest of Fontanelle. To this union two daughters were born, Mardelle and Marlene. Elmer died in May of 1940, following a 48-hour illness. Geraldine and her daughters then moved to Fontanelle where they made their home.

Geraldine worked for the phone company for 38 years, starting in Fontanelle and later in Greenfield where she retired in March of 1979.

She was a member of the First Congregational Church and active in the Mayflower Guild.

Geraldine married Walter J. Bauer in 1945, and they were the parents of Mary Elizabeth, who died in infancy. Walt and Geraldine moved to Greenfield in 1964. Walt passed away on June 12, 1969.

Geraldine was active in the Greenfield Business Women, was a 50 plus member of Easter Star, Cora Rebekah Lodge and the American Legion Auxiliary. She had many hobbies and enjoyed her flowers and gardening. She was also a very good cook.

In 1979 Geraldine married Ivan Sickels in the Fontanelle Congregational Church. They made their home in Greenfield. Ivan passed away at the Iowa Veterans Home in Marshalltown on September 15, 1991.

She was preceded in death by her parents, brothers Everett Anderson, DeAlton Anderson, and John Edmond Anderson, who died at the age of 9 months; sisters Nadine Blesie, Ann Schnepf and daughter Mary Elizabeth Bauer.

To order memorial trees or send flowers to the family in memory of Geraldine Sickels , please visit our flower store.
Send a Sympathy Card