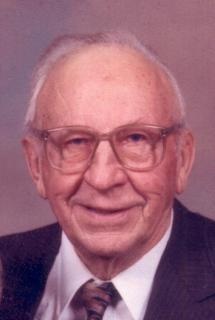 Funeral Services: Will be held on Saturday, November 19, 2016, at 1:30 p.m. at the Emmanuel Lutheran Church in Fontanelle with burial in the Fontanelle Cemetery. Full military graveside rites will be conducted by the Fontanelle American Legion Carlson Post No. 247. A luncheon will be held at the church following the burial.

Open visitation: Will be held on Friday, November 18th, from 2:00 p.m. to 8:00 p.m. at the Emmanuel Lutheran Church in Fontanelle.

Family Visitation: The family will greet friends on Friday evening November 18th, from 6:00 p.m. to 8:00 p.m. at the Emmanuel Lutheran Church in Fontanelle.

Memorials: To the Emmanuel Lutheran Church in Fontanelle.

Gilbert Herman Herr was born on October 31, 1919, the fourth child of John Conrad Herr and Christina (Ehm) Herr at the farm where Barbara Herr now resides. He was baptized and confirmed at Emmanuel Lutheran Church in Fontanelle, Iowa, where he remained a lifelong, faithful member.

As a youth, he attended country school through the 8th grade. He also worked on the family farm with his father and brothers Bill and Walter. As a teenager, he worked as a hired man for Herman Marckmann.

On June 29, 1941, Gilbert was united in marriage to Darlene Alberta Gross and began their married lives on the farm where Darlene grew up. To this union two sons were born: Ronald John and Galen Gilbert.

Gilbert joined the U.S. Army in 1942 at Fort Des Moines to serve during World War II, and after training in Louisiana, he was stationed in England in the Corps of Engineers. After D-day, the Corps of Engineers followed the infantry to rebuild bridges to keep the front lines supplied. Gilbert rose through the ranks to become a Staff Sergeant. His ability to speak German proved helpful in procuring supplies. He was awarded the Bronze Star for meritorious service during the Battle of the Bulge.

Gilbert’s passion was always farming and adopting new ideas and technology to make farming more productive and efficient. He was involved in farm organizations and the local cooperative. He also helped others get started in farming. Gilbert was a driven and hard-working individual.

The church was an important part of Gilbert’s life, and he served on the church board for many years. He was also active in local chapter of Aid Association for Lutherans (now Thrivent), serving as president for one term.

He was a loving father and especially enjoyed being a grandfather to his five grandchildren: John, Stephen, Philip, David, and Maggie. In his retirement years, Gilbert visited the elderly at local nursing homes.

To order memorial trees or send flowers to the family in memory of Gilbert Herr , please visit our flower store.