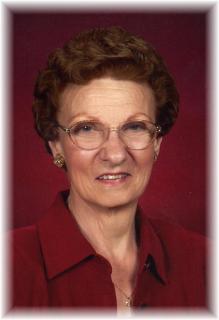 Gladys Christensen passed away on Saturday, January 5, 2013, at the Adair County Memorial Hospital in Greenfield.

Funeral Services: Will be held on Tuesday, January 8, 2013, at 1:30 p.m. at the United Methodist Church in Greenfield with burial at the Greenfield Cemetery. A luncheon will be held following the committal services at the church.

Family Visitation: The family will greet friends on Monday evening from 6 to 8 p.m. at the Steen Funeral Home in Greenfield.

Memorials: To the Gladys Christensen memorial fund to be established by the family at a later date.

Gladys Mae Christensen was born October 13, 1927, in Harrison Township, Adair County, Iowa, the daughter of Walter Washington and Ocia Grace (Weaver) Carl. Gladys passed away on Saturday, January 5, 2013, at the Adair County Memorial Hospital in Greenfield at the age of 85.

Gladys was raised and educated in Grove Township in Adair County. She went to country school and graduated from Menlo High School in 1945. After graduation Gladys worked at Greenfield Hotel as a waitress where she met Arnold Christensen. On April 21, 1946, she was united in marriage to Arnold in Atlantic, Iowa. To this union three children were born: Carol, Jim and Peggie. After their marriage they lived and farmed in Adair County until 1957 when they moved to Greenfield. In 1961, they opened Chris’ Refrigeration in Greenfield which they owned and operated until 1975. She then went to work at Murdy Drug which later became Mather Pharmacy until she retired in 2007. After retirement she cleaned houses for several people in town. Her hobbies were gardening and cleaning.

She was preceded in death by her parents and husband, Arnold Christensen in 1982.

To order memorial trees or send flowers to the family in memory of Gladys Christensen , please visit our flower store.
Send a Sympathy Card