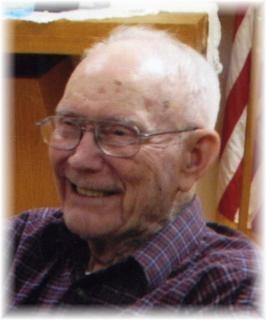 Glen Powell passed away on Thursday, November 13, 2014, at the Greenfield Rehabilitation and Health Care Center in Greenfield.

Funeral Services: Will be held on Monday, November 17, 2014, at 10:30 a.m. at the United Methodist Church in Greenfield with burial at the Greenfield Cemetery. A luncheon will be held at the church following the committal services at the church. Pastor Eric Schubert will officiate the service.

Family Visitation: The family will greet friends on Sunday, from 3:00 to 5:00 p.m. at the Steen Funeral Home in Greenfield.

Memorials: May be directed to the Glen Powell Memorial Fund to be established by the family at a later date.

Glen Elmer Powell was born September 26, 1920, the son of Clarence Martin and Jesse Pearl (Skellenger) Powell in Casey, Iowa. He passed away on Thursday, November 13, 2014, at the Greenfield Rehabilitation and Health Care Center in Greenfield, Iowa, at the age of 94.

Glen was raised near Menlo, Iowa, with some years spent in New Jersey as a youth. On March 6, 1943, he was united in marriage to Jean Marceline Burkheimer in Creston, Iowa. To this union two children were born: Ronald and Janice. Glen was a farmer most of his life, but he also worked as a farm hand, truck driver, and plumber, as well as handyman and janitor at the Greenfield Manor. He enjoyed gardening, bird watching, woodworking, reading, and bowling, and he especially loved spending time with his children, grandchildren, great grandchildren, and other family and friends.

To order memorial trees or send flowers to the family in memory of Glen Powell , please visit our flower store.