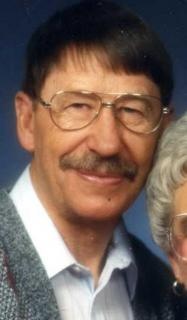 Glen Eldon Rochholz was born on December 7, 1933 in Guthrie County, Iowa, to Earl and Mabelle (Jackman) Rochholz. Glen was raised on a farm in Guthrie County and attended grade school in a country school. He then attended Casey High School, where he excelled in football and baseball, graduating as class salutatorian in 1952. After high school Glen worked for a short time before entering the Navy and being joined in marriage to Carolyn Elaine Beaman on Nov. 22, 1953 at the Canby Friends Church. To this marriage two sons were born. David in 1954 and Timothy in 1957. Throughout Glen’s life he and his family made their home in Des Moines, Long Beach, CA, Kansas City, MO, Rochester, MN, Norwalk, IA, Wichita, KS and St. Charles, MO. In 1992 Glen and Elaine moved to Adair, IA. They resided in Adair until moving into the Greenfield Manor in Jan. 2010.

Throughout most of his adult life Glen worked for the Federal Aviation Agency as an electronics/radar technician. After retirement from the FAA, Glen worked for Boeing Aircraft in Wichita, KS. While living in Adair he drove the local Trolley vehicle and was instrumental in establishing, funding and building the Boys and Girls Club of Adair. As an adult Glen was a man with a strong Christian faith and was always active in the Friends churches in the communities where he lived. Glen enjoyed serving on numerous local and state leadership committees in the Friends church. In 1977 he earned a bachelors degree from Kansas Newman University of Wichita.

Glen was a sports fan and athlete who enjoyed not only watching competitions but also participating and coaching. He enjoyed watching his sons and grandchildren compete in various youth sports as well as high school and college wrestling, cross country and track. He was a lifelong fan of the New York Yankees baseball, Dallas Cowboys football and Iowa Hawkeye wrestling and football. Glen and his wife Elaine traveled throughout the midwest watching the Hawkeye wrestling team compete in dual meets and NCAA national tournaments. They also attended numerous high school state wrestling tournaments in Kansas and Iowa. Glen enjoyed coaching Little League and Babe Ruth baseball and competing in numerous road races, marathons and triathlons. Glen and Elaine also enjoyed vacationing in their 5th wheel trailer, boating and waterskiing with family and friends at various lakes throughout the Midwest.

Glen was preceded in death by: his wife of 56 years, his parents and brother, Marvin Rochholz.

To order memorial trees or send flowers to the family in memory of Glen Rochholz , please visit our flower store.
Send a Sympathy Card