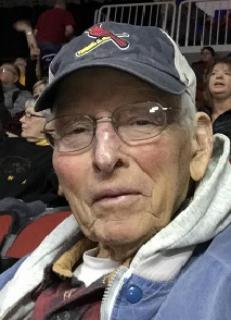 Funeral Services: Will be held on Thursday, July 11, 2019, at 10:30 a.m. at the Fontanelle United Methodist Church with burial in the Canby Cemetery, rural Fontanelle. Pastor Cathy Nutting will officiate the service. A luncheon will be held at the church following the committal services at the cemetery.

Memorials: Memorials may be directed to Glen Scott memorial fund to be established by the family at a later date.

Glen Leo Scott was born January 31, 1935 Lawrence and Frances (Dunn) Scott. He passed away on July 5, 2019 at Greenfield Rehabilitation Center, Greenfield Iowa at the Age of 84.

Glen was raised in the Fontanelle area and in 1949 graduated from 8th grade at Eureka Center.

On March 17, 1956 he was united in marriage to Shirley Irene Mulhern in Greenfield, Iowa. After their marriage they lived in Des Moines for a year and Glen worked at NAPA. In 1957 they moved to the Fontanelle area and began farming.

Glen was an exceptional marksman and enjoyed hunting with his dad and later with his son. Glen also enjoyed trap shooting later in life and the time spent with good friends while he usually just smiled as he came in first more times than not. Glen was also an avid fisherman and continued to fish right up until shortly before he became ill. Glen loved having all of the grandkids around, especially at Christmas. His garage became the meeting place for family, friends and dogs and he enjoyed the company greatly. Glen’s dogs, and there were many over the years, were Glen’s cherished friends and everyone in the community loved seeing a dog taking the passenger seat wherever Glen traveled.

Glen was a member of the United Methodist Church and other groups over the years.

Glen was preceded in death by his twin sister Shirley, his father, mother and wife Shirley.

To order memorial trees or send flowers to the family in memory of Glen Scott , please visit our flower store.
Send a Sympathy Card