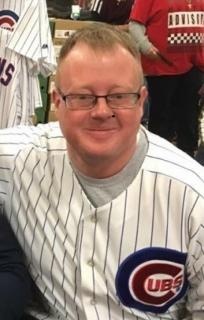 Funeral Services: Will be held on Thursday, January 4, 2018, at 10:30 a.m. at the United Methodist Church in Greenfield with burial at the Greenfield Cemetery. A luncheon will be held at the church following the committal services at the cemetery. Pastor Eric Schubert will officiate the service.

Open Visitation: Will be held on Wednesday, January 3rd, from 4:00 p.m. to 8:00 p.m. at the United Methodist Church in Greenfield.

Family Visitation: The family will greet friends on Wednesday evening from 6:00 to 8:00 p.m. at the United Methodist Church in Greenfield.

Memorials: To the University of Iowa Children’s Hospital or to the Animal Rescue League.

As an elementary school student, Greg Wallace skipped watching cartoons before walking to school — and instead stopped by his Grandma Nana’s house to read the newspaper.

As an adult, he found a dog outside during a thunderstorm, stranded and soaked. He named her Stormy. She became his constant companion at home, first in South Carolina, and then in Iowa, his birthplace, where he returned in his final years and found long-sought, thorough happiness.

Greg was a giver. He gave time to his grandma on those mornings. He gave a home to a lost dog. He gave rides and a place to sleep, for friends in need. He gave laughs to faraway buddies, through hilarious text messages, clowning on Joe Buck, as they all watched the World Series.

He gave love to his family and girlfriend, with whom he dreamed of owning an RV in retirement, to travel to college football games. When he covered those games, he gave readers of his newspaper empathetic, insightful stories about their favorite athletes.

And much to his delight, he gave bellyaches to Cardinals fans by using his iPhone to remotely play “Go, Cubs, Go” on St. Louis bar jukeboxes — a prank executed from hundreds of miles away … and always punctuated with his head-tossed-back, staccato laugh, deep and hearty.

Greg — first Gregory, then Pebbler and Cadillac and Red, but always a beloved son, brother and friend — passed away Thursday, December 28, 2017 at his home in Urbandale, Iowa, four days shy of his 40th birthday. He left behind dozens of relatives and friends, but he also left behind what he gave them all — companionship and compassion and stories they’ll tell forever.

Greg, son of Greenfield’s Doug and Jenice Wallace, was born in a blizzard on January 1, 1978, in Greenfield, the first baby to arrive that year in Adair County.

On the first day of kindergarten — having already learned to read (thanks to scanning the phone book) — Greg followed along as his teacher, Mrs. Weller, read “Big Brown Bear.” When she accidentally skipped some words, Greg piped up and told her so.

Though he would write and edit with a similarly keen eye later in life, his youth was not without amusing goofs. At 14, with his learner’s permit, he set out on his morning paper route, his mother in the passenger seat. On a strange curve along Second Street, his mom urged him to brake. He hit the gas by accident, ran off the road, and wedged the family van between a house and garage. Unharmed, he and Mom walked home, and returned with Dad to extricate the van.

Greg was nothing if not bold. In junior high, he tried to dunk a basketball off a picnic table, and got a broken arm and a ticket to the operating room for his troubles.

Then there was the time when he and his friend snuck into the College World Series’ bleachers at Rosenblatt Stadium. Greg found a small break in the fence, wriggled underneath, wound up covered in dirt, but ultimately got those bleacher seats. “No matter — I’d beaten the system!” he wrote later.

He graduated Greenfield High School in 1996 and set out for his first-choice college — the University of Iowa, from which he graduated in 2000, a double major in journalism and history. His career path would follow sports, and though he was never an elite athlete, his lone high school wrestling victory sent roars throughout the gym.

Mostly, he stuck to writing about sports, at The Daily Iowan student paper, and then at the Dubuque Telegraph Herald, Birmingham Post-Herald, and Anderson Independent-Mail. He covered Alabama and Clemson, always with the diligence of the paper delivery boy who made sure residents on his route got on the Omaha World-Herald at their door, not in the driveway.

He was a resourceful reporter. On the Clemson beat, rumors flew that assistant coach Chad Morris was interviewing for jobs. Greg hunted down an airplane tail number, found it was registered to Texas Tech, tracked the plane online, and was there to meet it (along with Morris and Texas Tech’s athletic director) when it landed at Anderson’s airport. A well-earned scoop.

But he also embraced his colleagues on the beat. On a new reporter’s first road trip — in frigid Charlottesville, Virginia — Greg invited the guy out for dinner, instead of just staying in. They became friends, and years later would clown on Joe Buck together over texts.

Greg was always willing to enjoy a meal or a beer or just simple conversation with friends during a night out. With friends and colleagues alike, he took pranks as well as he gave them. He could always laugh at himself, and his humble outlook endeared him to most people he met.

In pre-smart phone days, two other reporters decided to call Greg as they drove home separately from a game — and tell him Clemson’s star running back was transferring, knowing he’d have to frantically pull over to chase the phony story. He bought it hook, line, and sinker. But when he figured out the other reporters had pranked him, he called them up and laughed, deep and hearty.

For Greg, life was always better when shared. Never a loner, he developed a tight group of friends in Anderson at the Uptown Lounge, a locals’ pub. They’d later throw him a going-away party when he returned home to Iowa in 2014. A day after his passing, the pub honored him all evening by placing his favorite cocktail on the bar — Captain and Coke, with a straw.

He shared thoughtfully written cards with his parents on their birthdays. He shared a basketball hoop, as a Christmas gift this year, with his 1-year-old nephew, R.J., to teach him about sports. He shared his vocal talents, such as they were, while belting out Guns N’ Roses’ “Mr. Brownstone” on karaoke night at the Uptown Lounge. He shared suggestions for new TV shows he loved — and an encyclopedic knowledge of “Simpsons” quotes.

He shared fantasy baseball drafts with his buddies, who always looked forward to his trademark fist pump when he landed a key player — arm cocked at 90 degrees, a dramatic pause, and then that forward hammer motion, driving home his triumph, always with a smile.

The Cubs, Vikings, and Hawkeyes gave him joy (or angst, depending on the day). He got to see the Cubs finally win a World Series — and sang himself hoarse that night, thanks to “Go, Cubs, Go.” Just as valuable, his return to Iowa established a new tradition: He’d give his dad two Iowa basketball tickets for Christmas every year, so they could attend a game together.

A job as a communications specialist at Iowa State University brought him back to Iowa — and blissfully far from the recent instability in journalism — but better still, he found love. For 14 months, Greg and his girlfriend, Jodi Kalb, shared adventures. Like that trip to New Orleans in a tropical storm. Or going to see Rebirth Brass Band when they came to Iowa.

Or that day in Pensacola Beach, Florida, Greg’s yearly vacation spot, where he wanted to retire. Greg, chronically fair-skinned, got such a bad sunburn a day earlier that a police officer encouraged him to avoid the sun that next day. “Will do, sir,” Greg replied, dutifully. He always made Jodi laugh. And she could always keep him in line, as he proudly told his friends.

On the evening of December 15, about two weeks before he passed, Greg opened up his Facebook account and began to type. Even away from journalism’s daily grind, he never lost his love for writing. He wrote about movies and politics and sports on his Facebook page, while also freelancing high school games for The Des Moines Register and college sports for Bleacher Report.

But on this day, Greg felt reflective. Five years earlier, that same week, the Anderson paper eliminated Greg’s position, which eventually set him on a course back to Iowa — to a fresh start, to his family, to love and happiness.

“Hard to believe so much time has passed, but it has been a heck of a journey,” Greg wrote. “Had some ups and downs but I am so glad I got to come back to Iowa at last and do some work that is fulfilling among family and friends old and new. I wouldn't have it any other way.”

Preceded in death: His grandparents, Denzil and Frances Cunningham and Harold Wallace.

Survivors: He is survived by his parents, Doug and Jenice Wallace of Greenfield; sister, Gina School and husband Bob and their two children, R.J. and Violet of Greenfield; grandmother, Mary Wallace of Greenfield; aunts and uncles Carole Lochmiller, Ted and Becky Wallace, Mark and Lori Wallace, and Kurt and Lynne Wallace; girlfriend, Jodi Kalb of Johnston; his dog, Stormy; other relatives and friends.

To order memorial trees or send flowers to the family in memory of Gregory Wallace , please visit our flower store.