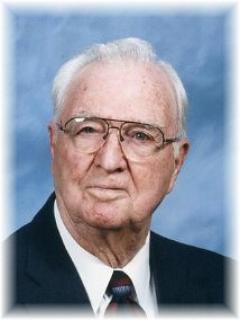 Funeral Services: Saturday, August 4, 2012 at 3:30 p.m. at the United Methodist Church in Greenfield with burial at the Greenfield Cemetery. A luncheon will be held following the committal services at the church.

Harold Orville Adamson was born September 16, 1910 to George Ellsworth and Margaretha (Eckardt) Adamson at home in Prussia Township, Adair County, Iowa. He passed away Tuesday, July 31, 2012 at the Greenfield Manor, Greenfield, Iowa at the age of 101.

Harold attended Prussia Township No. 8 country school and then attended Greenfield High School, graduating in 1929. Harold participated in football, basketball and track. In Harold’s senior 1928 season, the Tigers became the only undefeated, untied GHS football team for the next 50 years. After graduation Harold worked at home until marriage.

Harold married Wilma “Sis” Smith on March 18, 1933 in Maryville, Missouri. They became the parents of one daughter, Sharon, born February 23, 1938. The Adamsons lived on several Adair County farms before finally purchasing the Dermo farm in Grove Township and farmed there from 1945-75. They retired then and moved to their newly built home in Greenfield.

Harold was a 50 year Farm Bureau member and a 20 year Lions Club member. He enjoyed woodworking, quilting (making over 100 of them), sports, gardening, bowling, pitching horse shoes, playing cards and dancing. Harold participated in many area and State Fair horseshoe pitching contests winning numerous championships at the State Fair and area contests. Harold was a member of the Greenfield Methodist Church. He lived in Adair County his whole life. He especially enjoyed his grandchildren, Tracy and Pat, and was always there for them after their father’s death, the great-grandchildren and watching his son-in-law, Bob Daut, coach the different sports in Greenfield.

He was preceded in death by his wife, of 77 year, Sis Adamson; parents; brothers, Emil and Ken; sisters, Irena Sturdy, Vera Branson and Leota Estell and son-in-law, Ronald Lesiak.

To order memorial trees or send flowers to the family in memory of Harold Adamson , please visit our flower store.
Send a Sympathy Card