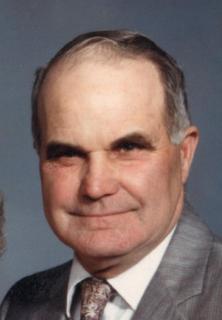 Funeral Services: Will be held on Saturday, November 24, 2018, at 10:30 a.m. at the Steen Funeral Home in Greenfield with burial in the Greenfield Cemetery. Full Military Graveside Rites will be conducted by Greenfield American Legion Head-Endres Post No. 247 and V.F.W. Post No. 5357. A luncheon will be held following the burial at the Greenfield Gospel Chapel. Mr. Bill Moore will officiate the service.

Family Visitation: The family will greet friends on Friday, November 23rd, from 5:00 p.m. to 7:00 p.m. at the Steen Funeral Home in Greenfield.

Memorials: Memorials may be directed to the Harold Caviness memorial fund to be established by the family at a later date.

The family farmed and Harold thrived on farming. At the age of five he joined older brother Earl to help their Dad milk their six cows. He told of pulling weeds in the fields on his hands and knees and the challenges of scooping corn on the ear from a wagon.

While a child, a neighbor brought the gospel message to the family. Harold responded to that message and accepted Jesus Christ as his Savior. As a teenager, Harold bought a used Farmall B tractor, a post-hole digger, and a buzz saw for cutting wood that allowed him to do custom work for neighbors. He also worked at the Orient Sale barn on sale days.

Rural Adair County was home to Harold. His family often commented that it was news if he ever traveled out of the county. He graduated from Orient High School in 1947.

In 1952 during the Korean Conflict, Harold was called to leave Adair County and serve his country in France. During this time he corresponded with a young lady named Beverly Colleen Claussen.

After his return home, they were married on February 14, 1954. In the same week, he purchased the farm from his grandparents Rollie and Rhoda Dwigans, the farm his grandparents had purchased in 1917 and was located one mile west of where Harold was born. To this marriage four children were born: Becky, Beth, Randy, and Ronnie.

Harold and Beverly would often host visiting preachers and missionaries. Harold enjoyed making Sunday breakfasts of bacon and eggs for his guests. He also enjoyed gatherings and you were especially welcome if you brought deviled eggs.

For Harold Caviness the words of the prophet Zechariah were true, “I am a farmer, the land has been my livelihood since my youth.” On November 19, 2018 Harold Caviness left Adair County and went home to be with his Savior.

To order memorial trees or send flowers to the family in memory of Harold Caviness , please visit our flower store.
Send a Sympathy Card